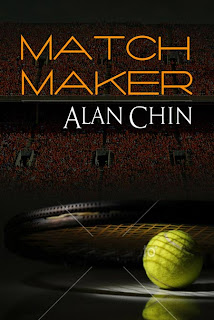 Hi everyone,
My favorite fan, Fausto Unamzor, made a video trailer for my soon-to-be-released novel, so I thought I’d share. This is the same sweetheart that made my other trailers. I’d love your feedback.

In the four years since being forced off the professional tour for being gay, Daniel Bottega has taught tennis at a second-rate country club. He found a sanctuary to hide from an unkind world, while his lover, Jared Stoderling, fought a losing battle with alcohol addiction to cope with his disappointment of not playing on the pro circuit.

Now Daniel has another chance at the tour by coaching tennis prodigy Connor Lin to a Grand Slam championship win. He shares his chance with Jared by convincing him to return to the pro circuit as Connor’s doubles partner.

Competing on the world tour is challenging enough, but Daniel and Jared also face major media attention, political fallout from the pro association, and a shocking amount of hate that threatens Connor’s career in tennis, Jared’s love for Daniel, and Daniel’s very life.

Posted by AlanChinWriter at 4:16 PM