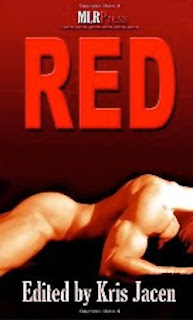 
I recently came across Victor J. Banis’ ‘The Final Curtain’ in an anthology of collected gay stories “Red,” with authors William Maltese and JP Bowie. In his story Banis goes back to a mode of writing that was so popular in the late 19th century to the beginnings of the 20th century: of relating a story within the story itself, as in the writings of Edgar Allan Poe, Arthur Conan Doyle, W. Somerset Maugham, Joseph Conrad among many others.

Banis weaves his tale in a peopled bar with gay men about with the lead character sitting alone in the back and looking up at no one. The story that he relates hooks us in and we’re caught up with what is happening…but can it be retold? How does Gaylord fade away while Nick still has the sin of his disappearance upon him? Or does he? Banis doesn’t tell us but like all great storytellers he pulls us into the story till we’re at the end, more intrigued and puzzled but strangely fascinated to read it over and over again --it holds you that much. Some short stories can be more intriguing than horrendously long novels and Banis has a winner here.

Banis has painted numerous tales over the years, “The Why Not,” “The Man from C.A.M.P.,” “Longhorn,” “Lola Dances,” “Angel Land,” and the best non-fiction book written in some years “Spine Intact, Some Creases,” among countless others. This short story ‘The Final Curtain’ again shows him at his best, playful but serious as he still experiments with his creative powers and melds another tour de force made so alive and active by his talent. A short but mighty read! I recommend this wholeheartedly.

Posted by AlanChinWriter at 12:09 PM