Book Review: A Taste of Love by Andrew Grey 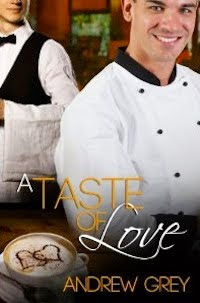 Darrel is living the dream life. He had always wanted to own his own restaurant, and that’s what he’s done. He is the main chef and owner of Café Belgie. He has his dream job, good income, stylish home. What could be better? Someone to share it with. Then Billy walks into his café asking for a job.

But of course, things are never that easy in love. Billy is penniless, a decade younger than Darrel, and he is the caretaker of his two younger brothers – five-year-old twins. But then, he’s also gorgeous and charming. This is a romance, so those obstacles to love don’t outweigh the positives, and Darrel jumps in with both feet. But as the story wears on, complications arise, and our hero must fight to hold his family together.

This is a simple, romantic, fast-paced story. It’s what I call a beach read – one where neither the characters nor the plot are too deep, so one can easily follow along without the need to concentrate. It is often funny, often heartwarming, and ends on an up-note. The characters are charming and at times overly sweet.

I came away with two trifling complaints. First, I felt the story, pretty much throughout, was in need of a stringent editor with a red pen to tighten the prose. Second, there are a number of sex scenes that I felt were overly long and uninteresting. I should point out that I seldom appreciate sex scenes cluttering up the pacing of a good story, so this is possibly a reflection of my own prejudice.

The last thing I’ll mention is not really a complaint, but I was slightly disappointed that there were no descriptions of Darrel cooking up fantastic dishes. I had falsely assumed going into this story that much of it would take place in a kitchen, and there would be mouthwatering narratives of preparing exotic foods. There were certainly opportunities to add something of that nature to spice up the story, yet there was almost nothing of the sort.

My slight criticisms did not detract from my enjoyment of this read. It is, in the end, an engaging romance that leads the reader through an array of emotions, and leaves them feeling good. I can recommend this story.

Posted by AlanChinWriter at 2:10 AM