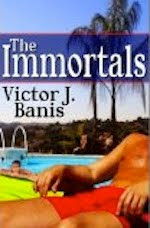 Jason was quite surprised when Peter took a fancy to him and immediately wanted them to move in together. Not only was Peter far better looking and successful than the men Jason dated, but he expressed feelings of true love. Jason didn’t consider himself a catch. He was rather ordinary looking and, because he was a student, had no income. None of that mattered to Peter, who had the looks and income to keep them both happy.

They set up house together and everything was going great until a fantastic career opportunity opened up for Peter in Los Angeles. Against Jason’s better judgment, the lovers moved to L.A., and temporarily moved into Peter’s father’s house until they could find a place of their own.

Peter’s father, Alders, had been widowed for several years. He was a man eaten by loneliness, and he welcomed the young men into his house. At first Jason couldn’t fathom how this ugly little man could have fathered such a handsome, desirable son, but over time, Jason began to peek beneath Alders’ unpleasant facade, and caught glimpses of a complex and intriguing man. Alders seemed to have that richly stimulating personality that his son totally lacked. Father and son were indeed opposites. And there lay the rub. As the days progressed, Peter’s image began to tarnish.

As always, Mr. Banis has drawn a set of noteworthy characters to enjoy. They are delightfully complex, as is the situation they find themselves in. I particularly relished Alders, with whom I wholly identified with. I felt he was painted by a master artist.

I could almost call this a coming-of-age tale, except that the protagonist was already of age. In this short but potent story, however, Jason comes to a definite maturity, a realization of what kind of foundation a satisfying relationship is built on. And once the light illuminates in his head, he has the courage to change his life in a most appropriate way.

The ending is not exactly what I define as happily ever after, but it is by all means a satisfying one. The author leads his characters, as well as the reader, down a path to where no other ending would gratify the reader, which is the mark of a gifted writer.

I can highly recommend this story to all readers.

Posted by AlanChinWriter at 3:37 AM