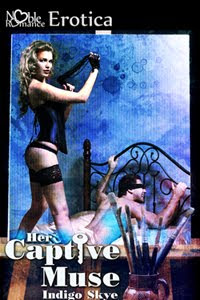 This weekend I’m host author Indigo Skye as she celebrates the release of her debut erotica novel, Her Captive Muse. I’m featuring an excerpt from her novel below, and yesterday’s post is an interview with the author. So check it out. Also, Indigo is having a contest to win copies of her new book. You can check out to enter below.

Welcome Indigo. I certainly hope your blog tour is a success and I’d like to thank you for stopping by my blog for the weekend. So let’s get to the juicy stuff:
Book Blurb
When Brendan Delaney answered an ad for an artist's model, he was looking for an easy way to earn some extra cash. But Morgan Roan wanted more than just a model. Soon, Brendan finds himself caught in a web of deception and desire, lust and betrayal—her captive muse. What price pleasure?
Book Excerpt
It was almost midnight when he turned up the long driveway to Morgan's house. Every light in the place was on—and she wasn't alone.
He eyed the big, black Hummer parked in the driveway.
Only an asshole would drive a vehicle like that—a rich asshole. Brendan parked his motorcycle under a juniper tree and pocketed his keys. He walked up to the door of the studio, nervous as hell. When he heard Morgan's laughter, Brendan smiled. He raised his fist to knock.

But then he heard an unwelcome sound—another man's laughter joined with hers. Brendan froze with his fist an inch from the door. He had a queasy feeling in the pit of his stomach. He moved along the side of the house and peered in the window. He had to catch a glimpse of the competition so he'd know what he was up against.

He saw Morgan Roan at her easel, dressed in her blue kimono. Her hair was all mussed and she was laughing hard. Her mirth painted hectic color on her pale cheeks. She had a big, reckless smile on her face. The recipient of this wild smile was a nude young man with curly, black hair and olive skin.

Brendan's heart made the decision for him. He walked up to the door and knocked. Their laughter stopped on a dime.
"Who's there?" Sharp, surprised annoyance underlined her words.

"Brendan! What a surprise." She smiled a slow smile. "Did you forget something?"

He lost his cool and blurted out, "Who the fuck is that guy?" Before she could answer, he regained his composure and said, "You know what? Doesn't matter. I'm outta here. Have a nice life." He turned to go. He ached all over. His heart was the worst—felt like the fucker was trying to implode in his chest. He couldn't wait to get high—and then get higher.
"No, no! It's perfect." Morgan laughed and reached for his arm. "Come in." She gave him a little kiss on the earlobe and whispered, "Don't be a brat. If you can be a good boy, you can stay." She nipped at his neck and gave his ass a little swat.

"What the hell is this guy doing here?" Brendan kept his voice low so he wouldn't be overheard.

"I was feeling inspired. You weren't here. I wanted to work—I had to work—so I called Paolo. We've been at it all day."

"Yes we have," Paolo said with a lusty laugh. Morgan graced her new little boy-toy with a smile.

Brendan knew they'd been fucking. The knowledge shamed him and pissed him off, but he kept his mouth shut. He didn't want to get into a confrontation with her in front of a stranger. That was a no-win situation.

He kept his cool this time. He sat down in a chair near the easel and let Morgan pour him a glass of wine. She gave him a long, slow, smoky kiss. Brendan watched Paolo over her shoulder for a reaction, but the impassive young man held his pose. Paolo was handsome in a lean and mournful way—large, dark eyes and a thoughtful look on his face.
"Let's take a break." Morgan beckoned to her model. "We can finish up later. Come say hello."

Paolo sat up and reached for his clothes. He didn't use the dressing room, just dressed right there. Brendan glanced up at Morgan. She stood over him wearing a satisfied smile.

"I knew you'd be back." She leaned down to give him a kiss. He kissed her back and slid a possessive hand around her waist. He pulled her down into his lap and kissed her hard.
"I missed you." It was true. Just being this close to her turned him on. His cock grew hard in response to her giddy presence on his lap.

"What took you so long?" She ran her long fingers through his hair and pouted a little.

"I'm a busy man." He didn't want to tell her the truth—he spent the day nodding off in a park. "I'm here now," he said. "Send your little friend home in his Hummer and let's fuck."
"I can't send him home now. We're right in the middle of something. Stay—you can watch me work." She persuaded him with teasing kisses. "I'll be done in an hour, and we can go to bed."

Paolo didn't seem to notice. He took a glass of wine from Morgan and gave her a kiss. He nuzzled into her moon-silk hair in a tender way that suggested a long, affectionate history between them.

Brendan felt sick. A hot snake of jealousy coiled in his guts, ready to strike. He knew he couldn't react. To do so would be to lose face. He had no claim on Morgan. Nobody did—not even Paolo. He shrugged, pretending he didn't care, playing hard to get . . . and it worked. He turned toward the easel to sneak a peek at her newest creation.

Morgan pushed Paolo away and turned her attention to Brendan again. "I've missed you, sweet."

Paolo looked offended at this treatment and sulked into his wine glass.

Morgan led Brendan back to the chair and curled up in his lap, playing with his hair. "My bed was so empty without you."

He closed his eyes, breathed her in. She smelled of cedar and smoky-sweet opium. She shifted and spread her legs a little. Now Brendan could smell her freshly fucked cunt and Paolo's cologne.

"What about me? I was here," Paolo said, pouting a little.
"It's a big bed." Morgan grinned.

Paolo laughed in a knowing, man-of-the-world way Brendan found annoying. Brendan wished he could laugh like that—wished he could know what Paolo knew.

Paolo finished his wine in one quick swallow. He got to his feet. "I'm ready whenever you are," he said. The statement sounded like a challenge. He began to unbutton his shirt.
For one horrible moment, Brendan froze.

I'm not ready for this shit.

"Fabulous," Morgan said. She got up from his lap and went to her easel. "You can wait for me upstairs, lamb. We'll be up as soon as we're done here," Morgan said.

"We? You can do what you want—but I'm not fucking him. Your little boy-toy's not getting anywhere near me. I'm straight, remember?"

"Lighten up." A wild, eldritch blue glow lit her witchy eyes. "There are no labels here—only pleasure."


For a chance to win, just answer this question in the comments section below. “What’s your favorite position?” Be sure to include your email address so I can get in touch! I’ll announce the winner next week on Indigo Skye: Ink and Art. Good luck! 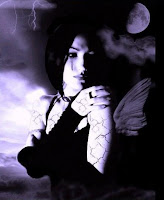 Author Bio:
Indigo Skye is a writer and photographer living in the American Southwest. Her first novel, Her Captive Muse, was released by Noble Romance Publishers in January. Her work has been widely published online. Last fall, her short story “True Confession” was published in the anthology Uniform Behavior. A full list of her published works is available on her blog, Indigo Skye: Ink and Art- http://indigoskyeinkandart.blogspot.com.

Posted by AlanChinWriter at 2:07 AM

Not necessarily in that order.

Anyway that I remain in charge ;)

Interesting excerpt of HER CAPTIVE MUSE!

Wish you many, many sales success!