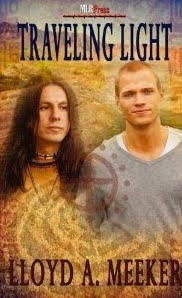 Summary Review: A unique and wonderful tale of love and wisdom spanning centuries
The Blurb: An eye for an eye…
Ian McCandless is a hospice nurse, training to become a shaman. When his mentor orders him to make peace with his estranged family, reluctantly agrees, anticipating another conflict-filled visit. On their way home from the airport Ian’s older brother, Will, interrupts a convenience store robbery and is shot, dying in Ian’s arms and calling to him for vengeance.
Ian uses his shamanic abilities to track down the killer, but his quest soon turns into a hunt for revenge—forbidden to any shaman. Ian’s pursuit jeopardizes his relationship with the spirit world, endangers the lives of those he loves, and threatens to banish him from the only path that gives his life meaning.
The review:
I confess, when I finished reading Traveling Light, I found myself wondering what on earth I was going to say about it. Well, of course there were certain things that could be and must be said—for starters, that this is a beautifully written novel, an almost perfect marriage of style and story.

But how, I wondered, to explain the story. It is one of those that defies classification, for starters. It’s a gay novel—sort of. It’s a romance—sort of. It’s a two-spirits tale—sort of. It’s a paranormal and a time travel and all kinds of other things…all sort of. In fact, it’s not really much like anything I’ve read before, though that may be more of an indictment of my reading habits than a description of the novel. What it is, for certain, is a wonderfully compelling read.

Ian is an apprentice shaman, in contemporary Vancouver. He is on a trip to try to patch things up with his estranged family in Halifax when his older brother, Will, is shot in a convenience store robbery, and Ian thirsts for revenge—a dangerous emotion for a shaman to hold onto, as his mentor Ang warns him. Nonetheless, angry and determined to find justice, Ian begins to search for his brother’s spirit, and for the man who shot him.

Ta-Kuat is an apprentice shaman in a 13th century Anasazi village whose mentor, Chiyuskanek, seeks something called the Door Stone that he believes will bring critically needed rain and save their village from extinction—but Chiyuskanek’s motives are not pure. He wants to bring the rain so that the succeeding generations of their tribes will sing his praises. And because his aims are not pure, he can no longer do the spirit travel necessary to search for the Door Stone. In his place, Ta-Kuat begins a search for the Door Stone.

Ta-Kuat and Ian meet on the spirit plane, and are drawn to one another. Bear in mind, on the physical level, they are centuries apart, Ta-Kuat dead long before Ian was even born. Now, if, like me, you’re thinking there’s no way they can make it happen on the spirit level, you’re in for a big surprise:
“He couldn’t bear his own ecstasy, yet knew it without effort, just as he knew Ta-Kuat’s. They formed one being, one matrix of power, one undulating wave on the vastness that lifted them, drowning them.

He became vast, permeable, fluid, gas, solid, a tree’s memory, desire fierce as a hawk’s cry…Ta- Kuat was a volcano and Ian an ocean meeting him, infinite welcome. He evaporated and condensed again around the heat of newborn rock, caressing him with his eternal waves…Then, helpless and all powerful, all his chakras flowered open, his body swelled, failing to contain his essence, bursting open into stars rising in a spiral fountain, twining together, together melting and falling—into spent ash, soil, stone, silent water, root, rest—complete.”

Whew! I’m telling you, I was ready to trade in my gonads. And that’s the condensed version.

An evil spirit guide, Sheen, convinces Chiyuskanek that the way to achieve power is to kill Ta-Kuat and replace his heart with the Door Stone. Ian, meanwhile, foresees the murder and tries to avert it—thus interfering in the thread of Ta-Kuat’s life—another mistake for a shaman.

The plot is complex, and evolves on many levels, and I don’t want to give too much of that away here. Suffice to say, there’s metaphor and mystery, and riddles to be solved on many different levels and in many different time spaces. In the end, the author is writing about nothing less cosmic than the beginnings of Time, as we know it. One cannot help but come from this reading experience a bit wiser than before—but that makes it sound a bit too profound and far less fun than it actually is. This is a book to be savored on many different levels.

As to the characters, Ta-Kuat is a terrific creation, as is Ang. Chiyuskanek is particularly chilling because he does not himself see the evil of his ways. There is a wonderful cast of spirit creatures or guides: Shining Woman, Wolf Lady, Rattlesnake, Ghost Woman, Raven and the wonderfully creepy Sheen, a sort of cross between a dragon and a scorpion. Ian seems to me a little slow sometimes to “get it” but he’s endearing in his innocence. In truth, most of the characters in the “real world” – though you will begin to wonder as you read about that designation—are a bit less convincing than their spirit counterparts, maybe reflecting the author’s inclinations. And it may be that the author did this deliberately; I wouldn’t be surprised. The sexual element, e.g., is far more subdued on the physical plane than what I quoted above.

All in all this is a mystical tour-de-force, a spellbinding piece of writing—as I said, like nothing I’ve encountered before—I can’t imagine anyone not enjoying this fully. But it does ask the reader to think. The truths that Ian and Ta-Kuat face are universal ones all of us must in time consider.
http://www.lloydmeeker.com/travelinglightex.html

Posted by AlanChinWriter at 4:32 PM