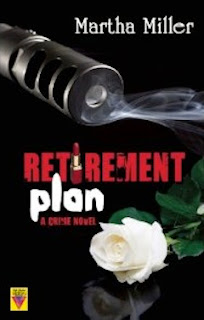 An intriguing and engrossing read. Lois Burnett and Sophie Long, two senior lesbians, decide to supplement their meager retirement income with some contract killings. With this premise, I was actually expecting a screwball comedy, but it turns out this is more of a crime/police procedural. There is humor, to be sure, much of it supplied by Myrtle, a friend of Lois and Sophie’s, who is looking for love and trying on new partners like changing clothes in a fitting room.

The killings, however, are handled in a serious manner. The story essentially follows two different threads, that of the hit women and of detective Morgan Holiday as she tries to solve the killings, the two paths leading inevitably to an eventual intersection.

Lois and Sophie struggle not only with their shootings, but also with an offensive neighbor mistreating his dog, the loss of their grandson, Matt, in Afghanistan, and the return of their adopted Vietnamese daughter, Ruby, who has been in prison on drug and prostitution charges. When Ruby is released from prison, Sophie convinces Lois they must give her another chance, despite some reluctance on Lois’s part.
Homicide detective Morgan Holiday, meanwhile struggles with problems of her own—her fluctuating weight, her own sexuality – despite a lesbian relationship in the past, she has yet to accept herself as lesbian—and a mother with Alzheimer’s who rarely recognizes her and has a penchant for escaping from her nursing home. The humor in these segments is grim.

I had problems with a couple of points, foremost among them it seemed that the two leads choose their retirement career somewhat blithely. I had to suspend disbelief on that score, but no more so than I would have done with, say, a fantasy novel, where I just have to accept the author’s premise that dragons are real. And while the author tries to adhere to the format of the hit TV show, Dexter, where Dexter is a serial killer who more or less redeems himself for viewers via the fact that the people he kills are all certifiable monsters, I thought Lois and Sophie were a little quick on the trigger, so to speak. True, a couple of their hits were undeniable scumbags and there’s little reason for anyone to regret their demise, but some others were not quite so clearly delineated. Deciding to kill someone who is annoying, for instance, even seriously annoying, or corrupting, as in abetting someone to fall off the wagon, falls more into the category of vigilantism than of righteous justice. But certainly plenty of people were ready to cheer Charles Bronson in Death Wish and its sequels, so mine may not be the popular opinion. And it helps here that the Lois and Sophie are well drawn and sympathetic, so that the reader can easily care about them and root for them, even if not always agreeing with their judgments. After all, how often in life do we agree with everything our friends decide?

Despite my quibbles, I found this a well written novel, with believable and likable characters and some not so likable, and plenty of suspense, not of the whodunit style but rather of the will-they-get-away-with-it sort, the answer to which I’m not going to supply here. And while ostensibly a lesbian novel, its appeal is broader than that. The issues with which the characters grapple are, after all, universal ones—the plight of seniors in today’s society, the search for love and acceptance, the failings of the legal system in protecting the innocent from the predators. One hardly needs to be lesbian to recognize these issues, or share in the struggle with them.

All in all, highly recommended.

Posted by AlanChinWriter at 5:05 PM