Book Review: Shining In The Sun by Alex Beecroft 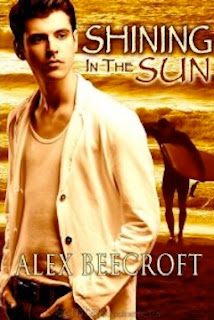 Alec Goodchilde has everything a middle-aged man could want—wads of money, important job, beautiful fiancé, controlling mother—except the freedom to be himself. He’s a prisoner within his own life. But every summer he drives to an exclusive yacht club on the Cornish coast and sails away for a month-long break from his overly structured life. This year, however, when his car breaks down and leaves him stranded on a beach, something inside him is awakened by the sight of a surfer dancing on the waves. The surfer is summer made flesh, freedom wrapped in a lithe package. He is everything Alex secretly longs for.

Darren Stokes’ only joy is riding the waves. He desperately needs a break from his life of grinding work, appalling relatives and hiding from his abusive ex-boyfriend. He sees that break in the form of a rich meal ticket that shows an interest in him. Darren coaxes Alec into an idyllic night together that turns into a life changing experience for both men, but no relationship is an island. The blinding light reality from each of their lives exposes the impossibility of their budding attraction.

At first blush this seems like a rather simple yet well-told story of opposites attract. Beecroft hooks the reader with vividly drawn characters and then draws the reader into a beautifully crafted world where both rich and poor can find a middle ground to protect each other and even flourish for a time. These characters come alive because of their genuine emotions and concerns.

But as both characters’ lives begin to catch up with them, the plot becomes more complex, with twists and turns that give the reader a nice range of emotional experiences. This is no simple tale of rich man meets poor boy. It is a multifaceted web of situations and emotions. The lovers are pulled apart again and again, but they keep fighting their way back to each other. By the end, the reader realizes that it is a story about finding courage. As Alex’s and Darren’s bond becomes stronger, they awaken in each other the pluck to fight back against all the negative influences in their lives that imprison them.

And do they win their battles? Do they live happily ever after? Well, this is a romance and at times a rather predictable one. I will say that I found the ending to be completely satisfying. Once again, Alex Beecroft has proven she is a topnotch storyteller. This is a read I can highly recommend.

You can read more about this book/author at: http://alexbeecroft.com/

Posted by AlanChinWriter at 2:16 PM