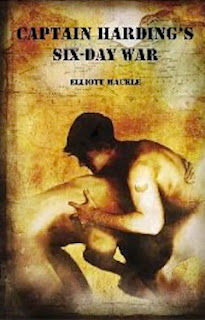 In 1967, Captain Harding is working his way up the promotion ladder within the U.S. Air Force. He’s a go-getter with a head on his shoulders and a talent for fixing problems. He is also gay.

The story begins with Captain Harding arriving at his new assignment, the post of executive officer for Wheelus Air Base in Libya. It’s a bit of a disappointment for Harding, who knows that he needs a tour in Viet Nam on his record before his next promotion will be approved. His mood takes a nosedive when he realizes his real assignment is baby-sitting the base wing commander, a loose-cannon named Colonel Adger. Harding is stuck taking care of administrative details while Adger constantly flies off to play golf with the bigwigs.

During his sexual adventures, he also strikes up a friendship with the American ambassador’s sixteen-year-old son. The two form an instant crush on each other, and Harding must wrestle with the ethical aspects of forming a relationship with a minor. The more his strong moral sense fights the idea, the deeper he falls for this lovely, precocious kid.

While dealing with a series of misadventures—including the murder of a gay serviceman, a flight-surgeon’s drug abuse, the death of his former lover in Viet Nam, and trying to protect a woman accused of being a lesbian because she refused to have sex with her superior officers—Harding must constantly protect himself from being exposed as a gay man. Three officers suspect him, and they attempt to out him at every turn.

In the run-up to Israel’s Six-Day War, a mob attacks the embassy in Tripoli, which takes Harding’s boss, Colonel Adger, over the edge and into madness. He steals a fighter jet and sets out to attack an Arab warship in order to force America into the war. To bring the colonel back safely and keep America out of the war, Harding must out himself while talking the colonel back to base. But can he do that? Can he throw his career away in order to save a man he loathes?

This is a rather compelling book that I have mixed feelings about. It is extremely well written, perfectly structured, and moves at a fast, exciting pace. Mackle captures a brusque voice that suits this military setting perfectly. There is conflict at every turn, and also tender moments.

Yet, I more than once felt I was being set up for something that the story failed to deliver. For instance: the opening pages describe the brutal murder of a young airman who was suspected of being gay. This seemed the perfect hook for a murder mystery, right? But then the story moves on and nothing else is said about the murder until the last twenty pages. I found it rather strange that a book that starts in such a way, simply drops that topic. There is no mention of an investigation, the resolution, nothing.

Then Harding’s last commanding officer, which Harding had some sort of sexual three-way relationship with, sends Harding a note threatening to expose the Captain. However, after the note, it also was dropped and nothing was done to deliver on the promise.

Lastly, the setting itself promised something grand, the Middle East leading up to the Six-Day War. I expected a rather smart, political thriller. Yet, the story focused on Harding’s sexual exploits and his efforts to keep them secret, along with his realization of deeper feelings for that special someone. I felt a bit disappointed that there were only a dozen or so pages that really delved into the war tensions.

Still, this is a compelling read. It is a very sexy story of finding love in the most unusual of places, and also a tale of battling bigotry to save yourself. The author does a brilliant job of defining the protagonists/antagonists. This is definitely a them-verses-us type story, and no matter how little or how much the reader likes Harding’s character, s/he cannot help but pull for him all the way to the last page.

The ending is a bit open ended, and very satisfying. This is a story that I can highly recommend.

Posted by AlanChinWriter at 6:47 PM

Interesting review. The book sounds intriguing overall. Will have to look into it.
Will also be looking for your book reviews on a continuing basis.
Rabbitupnorth. Kitchener On.