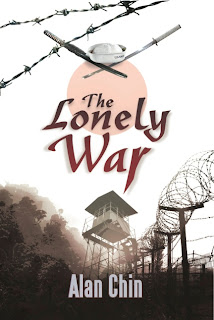 I was editing my second novel today, preparing it for republication with Dreamspinner Press. I was moved by the following passage and wanted to share. The following, then, is an excerpt from my novel, The Lonely War.

December 24th, 1944 - 1000 hours
Each day the number of POWs diminished. The prisoners conducted their morning ritual of checking their comrades who were unable to rise from their bunks. A man who could stand with help had five days to live; if he sat up but couldn’t stand, he had three days; if he couldn’t rise at all, he'd be gone by the next sunrise.

Andrew worked the burial detail, hauling the bodies onto carts for the long march out the gates, digging new graves beside the old ones, listening to the soulful words of Chaplain Moyer. He buried them all the same, captains and corporals, foot soldiers and orderlies, undistinguishable and anonymous. Mass graves were the final humiliation. Emaciated limbs became confused and tangled, fleshless faces pressed cheek to cheek, bodies huddled together as if seeking warmth, and the black dirt to absorb their souls, transforming their lost youth into fertile earth. That became the crude face of war. Not the stratagem of politics manipulated by leaders of nations or the chess game of generals played miles from the battlefields, war is the tragic and anonymous deaths of human beings whose seeds are lost forever.

The astonishment of being a survivor pressed on Andrew. Beriberi, dysentery, malaria, starvation, and suicide had swallowed a weighty toll over two and a half years. With each burial detail Andrew's sense of guilt deepened. Guilt was by far his most cumbrous burden. The miraculous events that shepherded him under Tottori's care were all that had kept him alive to bury the less fortunate. While handling the bodies, he felt utterly grateful for his good fortune, and at the same time, outraged.

The bodies had begun to whisper to him as he stacked them in the pits. Hideous, mournful, accusing rasps called to him. Even when he piled on the dirt—covering those gaping mouths, staring eyes, frozen facial expressions—the sound still filtered through, drumming in his ears. He threw himself into the digging and soon his exhaustion numbed his mind. It was the only way to silence the dead.

After a brief service, Andrew shuffled to Hut Twenty-nine to wait. Prison was waiting—for sunrise when you could not sleep, for chow when your stomach ached, for the hot part of the day to pass, for your hands to stop trembling from the horror of handling the dead, for a bath to wash away death's stench, for Tottori's sensuous caresses.

Andrew never thought beyond the next goal he waited for. The passing years had become an orderless jumble. The notion of time no longer existed. His only measure of time's passing was the accumulation of whispering corpses in the black dirt.

The sky opened up with a late morning shower. Water dripped from thatch roofs and gathered in storm ditches. Dust turned to slippery goop, but that didn’t stop Andrew from rushing to his bunk. He dropped his shoulder bag and removed his sarong before dashing out the doorway to have his nakedness enveloped by the rain's fleeting coolness. His body welcomed the stinging drops as he performed the fastidious movements of tai chi.

The reek of death seeped away. His mind soared beyond the voices in his head, lifting, lifting, until he floated above the clouds as his earth-bound body achieved one elegant position after another.

By the time the sun had brushed away the clouds, painting the sky blue, his mood had turned serene. The voices retreated. Returning to his bunk he took up Jah-Jai and played a soulful tune.

Only a few men were in the hut. John Allard was giving Kelso a haircut. Nash and Banks sat at a wooden table playing acey-deucy. Cord and Smitty played the food game. It had become a popular pastime where prisoners tried to out-torture one another.

Cord closed his eyes and his voice carried a note of rapture. “Pastrami and Swiss cheese on toasted rye bread with plenty of mustard and an icy beer to wash it down.”

Smitty groaned. “Mama's ravioli with three kinds of cheese and a bottle of Chianti.” He smacked his lips while Cord twisted in agony.

“Cold sliced peaches with gobs of whipped cream on top.”

Kelso shouted down the hut, “Shut the fuck up until after lunch, for God sakes.”

Posted by AlanChinWriter at 1:46 PM

Beautifully executed and arresting imagery in your words, especially the second paragraph of that excerpt. Sat here and reread it a few times, in fact.

Looking forward to the repub, I'll be grabbing a copy of it.

Rhianon, thank you for your kind words about my work. This is a story that is close to my heart. I very much hope you enjoy the next version. I hoping to make it special.