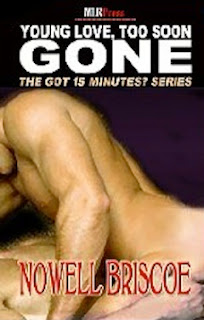 A bittersweet tale of, yes, young love, from a refreshing new voice in the genre of gay fiction.
Jack, the narrator, picks his story up more or less in the middle, when young Max sends him a note asking to see him. They meet at a pizza parlor, and as they chat, the story gradually unfolds of the young lovers, Max and Zach – how they met as boys, how friendship became passion and ultimately love – but a star crossed love that ends in a tragedy.
The story does not end with the tragedy, however, as the author cleverly carries us not only backward in time, but forward as well, and gives us, if not a happy ending, one with the promise of happiness to come.

I don’t want to spoil the story by giving too much away, and since the plot is a fairly uncomplicated one, there’s not much I can say about how the early story develops. Suffice to say that the tragedy springs from a family’s blindness to a son’s sexual reality and their insistence on some kind of “normalcy.”

Interestingly, the author manages to create a lot of sexual tension without a lot of sexual activity. To be sure, he and Max share with one another memories of some explicit experiences in the past, but the real sexual tension comes from the attraction that Jack feels for Max and which it appears is reciprocal, and this tension mounts when the pair go from the restaurant to Jack’s apartment to finish their conversation. Neither of them, however, seem to know quite what to do about their attraction—if it is even mutual, and like Jack, we’re never entirely sure of that--and the reader comes away from the scene thinking that after all maybe it was better that they let the moment pass.

What makes this story enjoyable beyond its barebones is the sincerity with which it’s told. One gets a sense that this is something more than a work of fiction, a feeling that the author is simply sharing with his readers his own touching experience. The characters are true to life, and one almost imagines he is in the room with them listening to them talk. I think most of us, like the narrator, have been in those situations where we thought there was a mutual attraction, but we weren’t entirely sure, or weren’t sure how to make anything happen. What makes this work so well is that, just as in real life, we aren’t entirely certain if the other person is feeling the same or if we are just misreading the signals. Make a move, or not? Will I only end up making a fool of myself? Surely we’ve all been there a time or two.

This author also writes a series of columns for his hometown (Monroe, Georgia) newspaper, a series of reminiscences of growing up there, which I have been fortunate enough to read, and the writing in this story is in very much the same voice, more a conversational one than a literary one.

Which only adds to the sense of verity, as if you were catching a glimpse, through a window, of real life. Whatever flaws this story has, it has the great virtue of believability. It rings true, and that is not an easy thing for any writer to accomplish. Hats off to Nowell Briscoe for this, his debut story.
.

Posted by AlanChinWriter at 1:08 PM