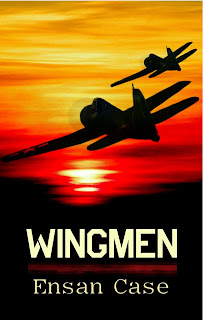 A year after the bombing of Pearl Harbor, Ensign Frederick Trusteau, a naval aviator in the US Navy, finds himself transferred into a new outfit, the F20 fighter pilots in Honolulu. Trusteau (Trusty) quickly earns a reputation as a lady’s man with the other pilots, which couldn’t be further from the truth. He is confused about sexual matters, and dates women because that is what is expected of him, not out of desire. But the one sexual thing that becomes clear to Trusteau is that he gets aroused anytime he comes near his commanding officer, Lieutenant Commander Jack Hardigan.

Hardigan is a flying ace, a hard drinking, hard driving skipper who takes a liking to Trusteau because of Trusty’s flying skills and his likable demeanor. Of course Hardigan also appreciates Trusty’s handsome looks, but he keeps that to himself. The two become so close that Hardigan makes Trusty his wingman, which angers the second in command, who had enjoyed that prestigious position before Trusty came along.

Hardigan and Trusteau grow closer and more intimate, needing each other’s comfort and support until they discover and come to terms with their mutual sexual attraction. They eventually spend a night together in a Honolulu hotel room consummating their love. The second in command sees them together and realizes the nature of their relationship.

The squadron sets sail aboard a fictional aircraft carrier, Constitution, during the later half of the war. They fly deadly missions in several key battles: Wake Island, Tarawa and Truk Lagoon. Both Trusty and Hardigan face danger, are shot down and show extraordinary heroism. In the final battle, Hardigan risks everything to save his wingman. Do they survive the battle? Do they end up together?

This is a well-written, exciting, and emotionally touching novel. It is bound to become a classic in gay literature. It is character driven, and the author takes great care in creating complex, believable characters. I found myself pulling for them on every page.

Case also has a remarkable talent for creating tension in each scene, much of which is derived from the physical and emotional jostling of fighting men jammed together in life-threatening circumstances. And set within these extreme conditions and surrounded by all these manly soldiers, the author paints a touching and plausible love affair between these two men.

I was impressed with the author’s depth of knowledge regarding WWII aircraft, procedures aboard an aircraft carrier, WWII battles, and also the camaraderie among military men. Case has done his homework well, and it shows in the seamless authenticity of the entire story.

My one minor complaint came in the last twenty or so pages where the author wraps up loose ends in a postwar montage that is, for the most part, shown through a series of letters. The ending fell flat and added nothing to an otherwise exhilarating story. Wingman would be a more enjoyable read had it simply ended in 1945. This novel will no doubt be a five-star hit with readers who enjoy MM, gay fiction, and/or historical military fiction.

Posted by AlanChinWriter at 7:36 PM