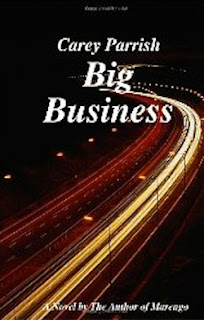 The residents of Number 56 Kensington Street, Holland Park, London are off on a another adventure when a new tenant, Sandra Leverock, moves into a flat on the third floor. Sandra is an upwardly mobile attorney who is engaged to an Aerospace Tycoon, Edgar Allardice. Tensions rise when busybody, landlady Mrs. Shugart, with her ally Mr. Humbolt realize that Sandra is the niece of her old nemesis, Margaret Armstrong.

Mrs. Shugart finds herself grappling with a past she had hoped was dead and buried, while Sandra unwittingly becomes embroiled in a mystery that seems to center around her aunt Margaret’s controlling shares in a lucrative Aerospace corporation. When dead bodies begin to pile up around Sandra, the other tenants—American journalists Rob Brent, Jeff Schrader, and DJ Pack—get sucked into a messy situation while trying to investigate the mystery on Sandra’s behalf. They uncover a plot that involves murder, intrigue, and corporate ruthlessness that threatens every member of Number 56 Kensington Street.

Big Business is Carey Parrish’s sequel to his novel, Marengo, and I’m happy to report that this novel showcases the author’s talents at his best. As with Marengo, the author creates a cast of interesting and charming characters, and weaves them into a tense, thoughtful mystery. Bottom line is, this is solid storytelling.

The author creates a delightful voice that has a distinctly British tone. The plot is breezy and fun. Each character has his/her own set of issues to deal with, while at the same time working to help the others. I was often not sure who the protagonist was because Mr. Parrish does such an excellent job of delving into each of the main characters’ lives. The fact that I already knew most of these players added to my enjoyment, but it is not necessary to read the first installment, Marengo. Big Business easily stands on its own.

I did find the ending somewhat predictable, which did not lessen my enjoyment. The only minor issue I did note was that after the mystery had been resolved, the author when on for several pages, summing up the plot that I already knew. I believe Mr. Parrish could have tightened the ending by a dozen pages and the result would have been a more satisfying ending.

That minor issue aside, I can highly recommend this novel, and I look forward to the next adventure from the tenants at Number 56 Kensington Street, Holland Park.

Other novels I’ve enjoyed from Carey Parrish are: Marengo and The Moving Finger Writes. You can read more about this novel and the author at: www.careyparrish.com

Posted by AlanChinWriter at 2:15 PM