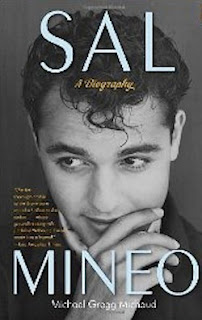 Sal Mineo was raised in a family who struggled to make ends meet. His father owned a casket factory in the Bronx, and his mother managed Sal’s early television and stage career. Sal appeared in a number of TV spots and big stage productions, including The King and I, staring Yul Brynner, before becoming one of the hottest teen stars of the fifties. His role opposite James Dean in Rebel Without A Cause made Sal into a teenaged heartthrob. Other notable movie roles were in Giant, The Gene Krupa Story, and Exodus. While still a teen, Sal was nominated for two Academy Awards for Best Supporting Actor (Rebel and Exodus).

In Rebel, Sal’s character, Plato, was the first gay character to ever be shown in a Hollywood film. Many young gay guys, myself included, didn’t even understand what the movie was trying to show with that role, but we connected with it in ways no other movie role had ever done.  And of course, we fell in love with Sal. It made Sal a national sensation.

But when Sal grew into his twenties, and was no longer suitable for teen roles, his career began a long, downhill slide. Many other child stars have had difficulty making the transition to adult roles, but Sal had two other career setbacks to overcome: 1) his mother, as manager, had spent all his money supporting his family, leaving him virtually penniless;  2) He was gay, and rumors of his private affairs began circulating around Hollywood and Broadway, and that was the kiss of death for this remarkably talented actor.

Michaud does an excellent job of presenting Sal Mineo’s rise to stardom, his mother’s mismanagement of his career, and the wild life he unsuccessfully tried to keep under wraps. The book is extremely well written and paced, while still managing to include a great deal of detail of the actors life and untimely death.

The book goes into excellent detail regarding Sal’s movies and the major television roles, as well as Sal’s failed attempts at producing/directing. It also gives the dirt on Sal’s private life, with accounts from several of his ex-lovers.

Movie buffs will certainly enjoy this meticulous look into Sal Mineo’s highs and lows, his dreams and ghosts, but this book can be enjoyed by everyone, because it is not merely a presentation of Sal’s life, but also a peek into that elusive thing we call The Entertainment Business.  I thought it was brilliant, with something noteworthy on every page.

Posted by AlanChinWriter at 2:50 PM