Book Review: Carry The One by Carol Anshaw 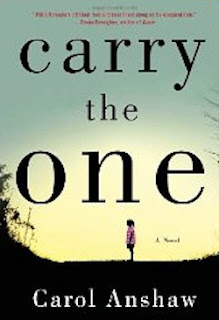 “So Carmen was married, just,” is how this story begins. The wedding takes place on a farm, the ceremony in a barn. It’s a somewhat joyous occasion, and several young folks get carried away and overdo it with drugs and alcohol, but hey, it’s a celebration.  Late into the night, the last guests to leave are Carmen’s siblings, Nick and Alice, who climb into a car with four others and head back to the city. But then a misfortune strikes—a tragedy so profound that it will deeply touch all these characters for the rest of their lives.

The story follows the three siblings—Carmen, a new bride and housewife; Alice, a lesbian artist; and Nick, a stoner and wantabe astronomer—as they put their lives back together and attempt to maneuver through the mine field of guilt and self-loathing brought on by the accident. The chapters are seen as snapshots of time over the coarse of twenty years, showing how each sibling struggles in their own way to regain something normal, but there is no way to bury this hurt, no way to stop it from tinting every relationship, every occasion, every quiet moment spent alone.

They try to lose themselves in relationships, careers, drugs, and crusading to help others, but nothing can lessen the pain. In short, it’s a sad, depressing story, that once it begins rolling down hill, never really achieves an upward trajectory.

The premise is marvelous. Early on, I had high hopes for this read. The story starts with a bang, and the first thirty pages are riveting, but then I began to have issues with the writing and the characters.

The prose is, for the most part, nondescript, with patches of sloppiness and moments of brilliance. I feel the author tries overly hard to sound “literary”, which often makes the prose jerky and awkward, rather than a smooth flow. I also feel that Anshaw does too much telling and precious little showing, which quickly becomes tedious.

Shortly after the accident scene, a pattern develops. All female characters are shown as strong, intelligent, and resourceful. However, all (and I do mean ALL) the men are either lying cheating bastards, spineless buffoons, or drug addicts who can’t tie their shoelaces without some woman there to show them how. I find her treatment of women vs. men characters sexist and offensive. It colors the entire story, making it impossible for me to enjoy the book, or to take Anshaw seriously as a writer.

I have no issue with someone writing a story geared for women. Neither do I take issue with flawed characters, male or female. In fact, flawed characters tend to be the most interesting. But I do resent authors who blatantly attack a group of people by portraying them all as flawed, with little or no redeeming qualities.

The ironic result about her treatment of women vs. men characters, in my opinion, is that Nick, the most flawed and spineless character in the story, turns out to be the only interesting character. The author molds Carman, Alice, Maude, and Olivia into clichés, and hence, uninteresting characters.

The last issue I’ll mention is that, finishing the story, it seems that none of the three protagonist made any kind of a meaningful arc. After the tragedy, they all fall into their own defensive patterns that held true for them for the rest of the story. They struggle and struggle, but don’t really resolve. If they are able to overcome their obstacles, it is so subtle that it soared over my head.

Women readers will, no doubt, enjoy this book, men readers not so much. I cannot recommend this read.

Posted by AlanChinWriter at 10:09 AM