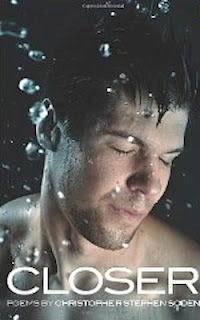 I recently reviewed a volume of gay-themed poetry entitled: Closer by Christopher Stephen Soden, and was so impressed that I asked Mr. Soden for an interview. The following is our conversation:


Q: When did you start writing and how many books have you published?
I started attempting poetry when I was in high school, and Closer is my first full-length collection.

Q: Was there someone in your family, a teacher, or perhaps a favorite book, that inspired you to begin writing?
My second semester in college, I took an Intro to Poetry Class, where I met Jack Myers. At the time I was an acting student, and had no particular aspirations to be a writer. At the end of the semester, Jack said he needed to see me. I was afraid he was going to read me the riot act. He looked me in the eye and said, “You need to be writing poetry.” At that point I was convinced it was divine intervention. I changed majors and Jack became my mentor, father figure and lifelong friend.

Q: What is it about poetry that draws you to it?
I think the richness and density of language, the music, the precision, the immediacy.

Q: What was the first poem you ever wrote about?
I’m a bit fuzzy, but it was in high school, and included some fairly graphic details about Aztec warriors and human sacrifice. Throbbing hearts and all that.

Q: Do you prefer writing poetry over fiction, or does it make any difference at all?
There are fiction writers I love ( Flannery O’Connor, Raymond Carver, Carson McCullers, Ethan Canin, William Faulkner, Jerzy Kosinski) and I must admit, I briefly attempted fiction, but it soon became clear that I had a propensity for poetry.

Q: Who are the authors who most influence you today?
Tracking influence can be tricky, but if I had to speculate I’d say : Phillip Levine, John Berryman, Russell Edson, Joan Larkin, Timothy Liu, Bruce Weigl, Robert Duncan, Ellen Bass.

Q: What’s the strangest source of inspiration you’ve found for your poetry?
That’s an impressively pointed question. Conceding that it would be difficult to pinpoint just one strange source, probably men’s communal showers. Though it doesn’t seem strange to me.

Q: Your latest book, Closer, has garnered an excellent review at http://glfictionreviews.blogspot.com/
Can you tell us about it?
I have been crafting poetry as my vocation for more than 35 years. Over that period I’d been sending out manuscripts to publishers on a regular basis. I have been blessed to be published in journals and anthologies, but Sven Davisson and Rebel Satori / Queermojo Press is the first to publish (June 14th, 2011) a full length collection of my poetry. It represents the best (near as I can tell) some of it more than 20 years old, others quite recent. It includes poems written in first person, some of them made up, some of them actually happened. Many address my life as a queer male in American culture, others examine different issues. I think Closer covers a full range of emotions from playful and celebratory to angry and intense. I believe it can offer insight into the homoconnective experience for people of all orientations.

Q: So, if you don’t mind sharing, would you tell us about your latest work in progress?
I have been trying to organize the manuscript for my next collection and collaborating with a friend on an extended dramatic piece, based on the contents of Closer.

Q: Name a book or movie written by someone else that you wish you had written, and why that one?
Mullholland Drive. It astonishes me. I just adore David Lynch and the way his films blur the dividing line between dreams, nightmares and reality. Lynch's audacity always feels so nonchalant.

Q: What do you like to do when you’re not writing?
Naps, eating out, long, hot, luxurious showers, cooking, dog park, theatre, movies.

Q: Do you enjoy writing, I mean, do you find it fun?
Like so many writers, if I go too long without writing it throws me off balance, so in that sense, it’s more like a drive or passion or pressure valve. But yes, I do also find a pleasurable aspect, that makes it possible to spend prolonged amounts of time, perfecting a poem, tinkering, revising, gauging the line-breaks. I actually think it’s crucial that as artists we give ourselves permission to play, because that pleasure of submerging ourselves in a medium we enjoy (language, sound, image) also connects us to the reader.

Q: What, more than anything else, fills you with rage?
This homicidal, Draconian code of manhood that some men are indoctrinated to, that makes them think they have the right to impose it on other men at will. Remember the Scott Amedure, Jonathan Schmidt incident from the Jenny Jones Show on secret crushes that never aired? One man killed another because he professed his romantic love on a television show. Now, whatever may have happened between the taping of that show and the actual execution, somewhere in his past, someone (or a succession of people) told Schmidt he had the right to end another man’s life, if his manhood was challenged. Or whatever ridiculous motivation he embraced. Now any gay man could tell you, it’s just as likely Amedure was honoring Schmidt’s manhood, but somewhere we need a translator to negate this hysterical, toxic culture that says virility and compassion towards other men is impossible. Our queer brothers and sisters are dying left and right, and somewhere, somewhere their persecutors are being given permission to treat us like monsters. To demonize us.

Q: Can you tell us something about the place you call home?
I live in a hotbed of intolerant conservative ignorance called Dallas, Texas. I should add that it’s easy to surround yourself with open-minded people when you’re into the Arts. I’m a theatre critic, and belong to two poetry workshops, and around here, it’s unusual to find much homophobia in the creative community. I’m also told we have the sixth largest LGBT Community in America, so we do have our support centers and gay friendly congregations. I have to admit, it could be worse. On the home front I share a condo with my mother and Chloe, our rescued Shih Tzu. Both my elder sisters live in Dallas and my family and friends know I’m gay.

Q: Anything else you’d like to share?
I truly believe that art can change the world, and for that reason, I guess I’ve straddled the fence when it comes to my poetry manifesto. It is my fervent and devoted desire to craft poetry that is intelligent, meticulous, layered and subtle while also making it intriguing, avid, energetic, vibrant and accessible. I have no problem with erudition, but as Pauline Kael (the film critic) so often pointed out, you can excite and entertain without pandering. My second strongest wish is that, in addition to reaching other members of the LGBT Community with my poetry, I just might provide a bridge for straight-identified people who need to understand that same-gender eroticism is just another aspect of our shared humanity.

Posted by AlanChinWriter at 8:10 AM