The Man Behind The Author 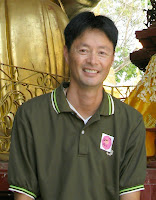 I often talk about myself on this blog, but seldom mention the man who makes all my published writing possible, Herman Chin, my husband. I say he makes my writing possible because he manages everything else in my life—cooking, shopping, cleaning house, paying bills, throwing dinner parties, etc., etc.—in order to give me the time I need for writing. Without him, I would still be struggling on page 230 of my first novel, instead of having five published novels, three screenplays, and two completed manuscripts.

Herman is a workhorse, a dynamo of energy who is always doing something useful. He quietly goes from task to task, focusing all his energy on whatever issue will make our lives better, easier, or more enjoyable. And his efforts are not just for us. If we go to a friend’s house for a party, he will spend half the night in the friend’s kitchen cleaning up.  He’s a totally giving person who expects little in return. In short, he’s a rare gem.

Herman is proud of the fact that he is a doer. He has little patience for people who constantly sit around talking about what needs to be done. While most people are discussing it, he’s doing it.  The drawback there is that Herman is a perfectionist, and needs everything done to a certain standard—his standard—which is why, I think, he does so much, to insure it gets done his way. I used to have issues with that, because, of course, I had my own way of doing things and I don’t, as Herman will readily attest, take criticism very well. But over the years I’ve learned to let him do everything his way.

Herman and I used to have horrible fights ending with us not talking for several days on end. I can’t, however, even remember when our last disagreement occurred. After eighteen years, we’ve already fought all the big battles, and we no longer let the little things throw us off balance. We’ve both learned to adjust to each other, and our relationship has grown from fiery intensity to comfortable joy.

In our household, Herman is the unquestionable boss. I give input, he makes decisions. He wears the pants, and I’m happy to let him. The only place I’m in command is in my office, when I’m lost in my imagination, writing.

Many of our friends like to tease me about being henpecked, and I’ve seen my own family members role their eyes when Herman overrules something I’ve said. I don’t mind. It’s a small price to pay for living with this man who gives so much, who allows me to spend my days writing stories, while he expects little more than for me to curl up on the couch with him at night to watch a movie. I truly have no words to express the gratitude I have for this man, who makes possible everything that is important to me.

Posted by AlanChinWriter at 10:45 AM

well, I was fortunate enough to spend an evening with the two of you, and it was evident to me that the love was very real, and definiely two-way. I'd say you are both fortunate to have found what so many are ever searching for.