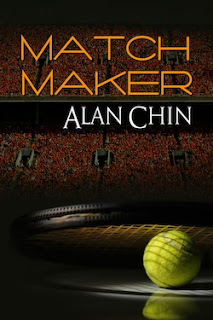 This week for my promo Tuesday, I'm highlighting one of my favorite stories, Match Maker.

My favorite fan, Fausto Unamzor,  made a video trailer for Match Maker, so I thought I’d share: http://tinyurl.com/2ev95ds

Blurb:
In the four years since being forced off the professional tour for being gay, Daniel Bottega has taught tennis at a second-rate country club. He found a sanctuary to hide from an unkind world, while his lover, Jared Stoderling, fought a losing battle with alcohol addiction to cope with his disappointment of not playing on the pro circuit.

Now Daniel has another chance at the tour by coaching tennis prodigy Connor Lin to a Grand Slam championship win. He shares his chance with Jared by convincing him to return to the pro circuit as Connor’s doubles partner.

Competing on the world tour is challenging enough, but Daniel and Jared also face major media attention, political fallout from the pro association, and a shocking amount of hate that threatens Connor’s career in tennis, Jared’s love for Daniel, and Daniel’s very life.

Connor Lin’s eyes grew large as the ball bounced short of the service line and sailed into his strike zone. He drew his racket back while planting his body in perfect balance; his arm swung, shoulders rotated, and his racket arched up through the ball and continued into a follow-through. The ball seemed to shriek from the impact as it sped bullet-fast toward the sideline. It scorched a pale mark on the green court a half-inch from the white line. But once again, it was the half-inch on the far side of the line. The lineman’s hand flew up, and he yelled, “Out.”

Connor dropped his racket and blinked at the mark, obviously not quite believing that he had lost another game.

Sweat dripped from his nose and chin.

He glanced at the chair umpire, attempting to coerce an overrule, but the chair awarded the game to Connor’s opponent.

Connor lifted the flap of his shirt, mopped his face, and bent to pick up his racket.

Watching him from the bleachers, it occurred to me that he must have dreamed about this match for most of his teenaged life. He had begun the first game with all the charisma of a champion poised for a run at brilliance, but the match had mutated into his worst nightmare. No brilliance materialized. Point by point, his entire being shriveled. His confidence and composure evaporated.

There was nothing anyone could do to reverse his downward spiral. I felt his frustration, a searing tightness in my abdomen. I had experienced the same ordeal many times, and even though half a decade had passed since then, I knew precisely how he felt: like a man alone at thirty thousand feet without a parachute. He was playing a quarterfinal match on the show court of an ATP satellite tennis tournament, set within the twisted pine forest between Carmel and the craggy cliffs of Big Sur. Five hundred shrieking, stomping fans packed the bleachers, and the loudest of them was Connor’s father, who sat three rows below me in the players’ section.

Cold fear. It first appeared in Connor’s eyes when he must have realized that, without the help of divine intervention, he would lose to a sixteen-year-old whose groundstrokes resembled a caveman swinging a club. His fear visibly gave birth to hatred, seething, and finally, humiliation. What Connor’s eyes showed eventually revealed itself in his body language. He looked like a pro tennis player—lean, agile body, good legs, coffee-colored hair gathered into a ponytail and covered with a ball-cap turned back to front, and the prettiest almond-shaped eyes I’d ever seen—but his slumped shoulders and marred facial expressions gave him away. He was out of his league, and he knew it.

I mentally listed his technical problems with a practiced eye. He had a decent first serve, but a weak, loopy second serve that my aunt Betsy could wallop for a winner. And when serving a critical point, his toss fell an inch or so shorter than normal, making him hit down on the ball and dump his serve into the net. He scrambled from side to side with the fluid steps that produce great footwork, but he seemed unsure of himself anywhere in front of the baseline, and three volleys hacked into the net and a botched overhead told me why.

Other than that, all his troubles lay between his ears. His problems stemmed from impatience. Instead of working the rallies while waiting for a weak ball to attack, he tried to crush winners from a defensive position. He won enough points to keep him pulling the trigger, but he also sprayed enough balls long, wide, and into the net to lose every game.

Nevertheless, even with his obvious technical and mental issues, he was thrilling to watch. His grace, explosive speed, and physical beauty sent chills up my spine. I was not in love with him. How could I be? I had never even met him. But I loved watching him play.

Connor lost the first set with a bagel, and his father shrieked hysterically. At first, he directed his outburst at Connor, telling the boy how to play, then at the opponent, for not being good enough to be on the same court with his son. The chair umpire notified security on his walkie-talkie, and we all waited while two uniformed men escorted Connor’s father from the bleachers. He screamed obscenities all the way to the parking lot.

Connor sat through the whole scene crouched forward on his bench with a white towel draped over his head. I would have bet fifty bucks that tears were flowing under that towel, but I doubt I would have found any takers.

Connor’s game continued to disintegrate through the second set. After a heated argument with the chair umpire over a questionable line call, he turned to flip the bird at a heckling spectator and received a code of conduct warning for “visible” obscenity. Two games later, another out call had him tomahawking his racket and unleashing a screech. It was a sound of pure anguish. I could only shake my head and watch as that temperamental athlete, with the sublime groundstrokes of a top-ten player, suffered a mental meltdown in public view.

I longed to cradle him in my arms and explain that it was only a game, that it should be fun. I wanted him to know that he didn’t need to battle against the pressures that the world threw at him, but he was in no condition to listen to anybody, least of all a has-been like me.

In Connor’s last service game, while he waited for his opponent to step to the baseline, he glanced into the stands. We made eye contact for a dozen seconds, and he looked right through me, as if to say, “Fuck you, you know-it-all bastard. At least I’m down here, still in the fight. What the fuck are you doing?” I saw something flicker deep within those beautiful eyes, something more than defiant pride. Or maybe I just chose to see. Even though his emotions had run away with him, I saw his courage as clearly as if he were holding up his heart like a metal shield.

I sucked in my breath and held it until he looked away.

Posted by AlanChinWriter at 9:18 AM