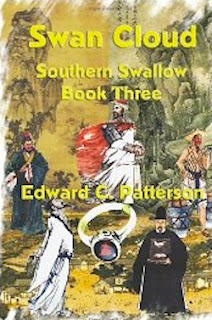 A Brilliant Work that will linger in your Heart and Soul

This delightful read is book III of Edward Patterson’s Southern Swallow series. Swan Cloud, like its predecessors (The Academician and The Nan Tu) is told by K'u Ko-ling, the amusing servant to the Grand Tutor, Li K'ai-men, who must forgo his obligated mourning period when his father dies, and sets out on a diplomatic mission for the Emperor Kao - a mission fraught with political intrigue and treachery.

The mission is a plan to reel in the warring generals and forage a peace with the enemies to the north. But while the Grand Tutor labors to help bring about a durable reconciliation, politicians closest to the Emperor are more focused on their own benefit. In an effort to fight for justice, Li K’ai-men finds himself battling the Emperor’s advisors, who now seem hell bent on destroying him.

Set on the broad canvas of Sung Dynasty China (12th Century), Swan Cloud is a tale of separation and sacrifice - injustice and intrigue. It represents a turning point in this saga for the hero and his band of spiritual warriors.

I have adored all three books of the Southern Swallow series, for a number of reasons. I particularly enjoyed the characterizations in this character driven novel. Patterson has created a number of interesting and likeable characters. They are flawed, and struggle to overcome those defects. Even the "bad-guys" developed into memorable foes.

Second, the author skillfully weaves an intriguing plot that holds the reader to the page, needing to find out what happens next. There came a point deep in the novel where I literally couldn’t put it down until I finished the last page.

The author has created a delightful voice. The tale is told both in third person, and also K'u Ko-ling’s first person narratives. Both voices are distinct and captivating. It is a pleasure reading such well-crafted prose.

Edward C. Patterson is scholar in East Asian culture. So not only is the storyline based on true historical events, but the descriptions of the cultural settings and rituals ring true.  Patterson has done his homework, and it shows from first page to last.

My one issue with the entire series so far is that Li K’ai-men, the Emperor’s Grand Tutor, and his band of devoted followers wields tremendous magical powers, but for some reason seldom use these powers to turn events to his or the Emperor’s favor. I kept wondering, why the author gave them these colossal powers if they failed to use them.

For anyone interested in reading Swan Cloud, I would highly recommend reading book I & II first (The Academician and The Nan Tu).  There is simply too much plot and relationship building that occurs in these earlier novels that is needed to fully understand the situations presented in Swan Cloud.

Readers who love historical fiction will no doubt treasure this series. But these books can be enjoyed by anyone who appreciates fully developed characters and finely crafted stories. This book, this series, is a gem that can be appreciated by everyone.

For more information about this book/author go to http://www.dancaster.com/

Posted by AlanChinWriter at 10:01 AM