Is National Geographic Batty, or is it just me? 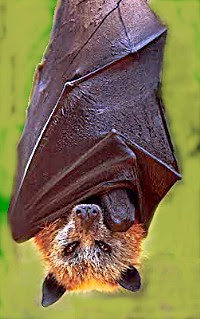 Last night, I watched a nature series on the National Geographic channel, which is strange because I seldom watch any commercial television. The program focused on deserts of the American South West, and since that is where I live, I thought it would be interesting to see what happens outside my back door.

But one fact they mentioned stuck in my head, and I haven’t been able to shake it. They stated that nightly, twenty million bats fly out of caves in the South West, and fly up to two hundred miles scarfing up a hundred tons of insects.

For me, those numbers are mind-boggling. I was first struck by the claim that a bat can fly hundreds of miles in a single night, I mean, it takes me three hours to drive that on a highway doing 70, so these bats must be doing twenty-five miles per hour. Gives new meaning to the term: bat out of hell.

Then I began to consider that stat of them consuming a hundred tons of insects per night. Do insects truly breed so rapidly that they can replenish what amounts to a hundred tons per day without being wiped out? That’s over thirty-six thousand tons a year—seventy-five million pounds—and that’s only in the deserts. How can that be?

Then I began to imagine what the world would be like if bats were wiped out, like so many other species. There would be so many insects flying about that it would look like those old movies about locust storms gobbling up crops and anything green. Who knew bats were critical to our comfort and survival?

These numbers keep drifting through my mind, to the point where I think I should stop watching nature programs. This old world is simply to much to comprehend, but how thrilling to live in such a place.

Posted by AlanChinWriter at 9:24 AM