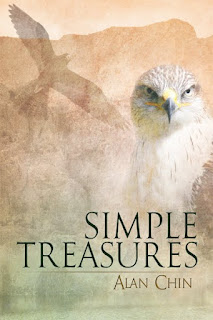 
Only the mediocre artist is always at his best – this is why we rightly judge an artist on the body of his work rather than on a single sample – we may just have gotten the wrong sample, that particular book when the writer’s aim surpassed his reach. It happens, but only to the true artist.

I’m happy to say that this time the goal was not beyond the artist’s reach. Simple Treasures couldn’t be a more fitting title for this offering from one of the best writers in the arena today, Alan Chin – because this is indeed a treasure, though writing this good is never really as simple as it looks. Here, as in his best work (but no, of course, not every time) the author goes beyond the confines of writing and enters the realm of art, and his genre is made the richer for it. As both a writer and a reader, I came away from this tale feeling that my experience—of life, of literature - had been greatly enhanced.

The title character, Simple, is a Shoshone. He has just been released from a mental hospital, where he has been abused essentially for the crime of being different. He is offered a job by Lance Bishop in the town of Saint George, Utah. Bishop’s father, Emmett, is an irascible drunk who has driven away every other caregiver – but in fact, Lance wants his father kept drunk. He plans to have his father committed and take control of the ranch, which he means to sell to developers. At first, Emmett rejects Simple’s overtures as well, but he soon recognizes a kindred spirit. There is a romance, too, between Simple and Emmett’s gothic-gay grandson, Jude.

Emmett is dying of cancer, and the ever present vultures roosting atop the barn provide a Greek-chorus reminder of imminent death. It was his wife’s death that sent Emmett into this long, downward spiral of grief and self-pity. Simple’s memory is dead, too—or as he himself explains it, his memory gets flushed clean each night. And Lance is dead to the pleasures of life or the soul. Even Jude is infected, convinced that for him there is no Life for him here, in this town--that Life exists elsewhere, in San Francisco to which he plans to escape.

But that is only the story as told by the words. The real story is written between the lines, and it is about nothing less than the encroachment of death, and the reaffirming of life, through love, through dignity, and the oneness of all existence. A man becomes a memory, a falcon becomes a man, and love bridges the illusory abyss that separates us one from the other. And how magically the author weaves his story, painting indelible pictures from nothing more, it seems, than mere wisps of smoke.

Deep in the human body—yours, mine, everybody’s—there is just one soul that we all share, as if we’re just tiny pieces of the same puzzle…That’s why we’re here in the first place, to make our sliver of the soul shine like the sun.

Chin doesn’t write erotica, but it would be a colder heart than mine that wouldn’t melt sharing Jude and Simple’s “first date” – fishing in Bitter Creek.

Simple’s pole jerked toward the water. “Jesus, I’ve got one.” He hauled the pole back to set the hook.
“Give him line,” Jude said. “Play him.”
Simple leaned out over the water, retrieving line.
With a wicked giggle, Jude shoved Simple, who tumbled into the water and was swept downstream, still holding the rod high over the water. Laughing, Jude ripped off his hat and boots and flung himself into the water. He was swept along, fighting his way toward Simple.
They met in the swirling water and pumped their legs until they stood in the shallows. They shared a sensual hug and kiss. When they broke apart, Simple held up a trout…

Simple sets out to help Emmett transcend his looming death by restoring his dignity and by transferring his spirit into the body of a falcon, and the story climaxes in a stunning ceremony in which man and falcon battle for supremacy while Simple dances and chants himself into an exhausted stupor.

Simple began to dance again. His feet stomped the ground with the same rhythm that Emmett had pounded out with his cane. He chanted and his voice grew in volume…the wind died. Everything went silent—even the crickets hushed—as if the universe were holding its breath. A minute later, the bird shrieked. In the distance, the sound of the wind drifting through the trees grew into a steady pulse, like the slow beating of a heart.

This is a stunningly beautiful literary effort. In the end, I cannot tell you if the story is a good or a bad one – those are intellectual considerations, but this is not a story told from or to the intellect, it is told from the heart. As Simple tells the old man, Some things can’t be talked about. Words only confuse it.

Posted by AlanChinWriter at 9:43 AM