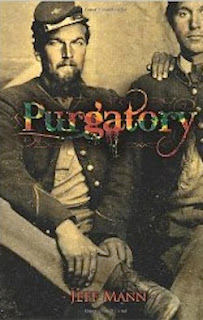 During the final days of the American Revolution, Drew, a Herculean Yankee, is captured by a ragtag Confederate band. He is put in the custody of Ian, a war-weary Southerner who has seen too much brutality inflicted on prisoners by his commanding officer, who also happens to be Ian’s uncle.

While on the run from the Yankees and being driven toward Purgatory Mountain, Drew is made a martyr, whipped and beaten and humiliated for all the sins of General Sheridan’s rampage and the frustration of the Confederates’ realization that they are losing the war.   But then the unexpected happens, Ian and Drew—captor and captive—find themselves drawn together. As a fragile love blossoms, Ian must find the courage to defy his uncle, and Ian and Drew must discovery a way to save each other from catastrophe.

This is an exquisitely written story. Jeff Mann’s command of prose is inspiring. He captures a voice that, line by line, is pure pleasure to read, to reread, to wallow in.

This story is never rushed. It takes place within the span of a week or two, and there is much packed into that timeframe. The pace is slow, often at a snail’s gate, giving the protagonist much time for reflection, and allowing plenty of time for a relationship to bud at a lifelike pace.

The tale is written in first person and present tense, which gives it an intimacy much like reading a personal letter or diary. However, I was not able to wrap my head around reading an historical account written in present tense. It simply felt strange, and I was unable to fully immerse myself in the story because of it.

For me, the book had two flaws. It took most of the story for Ian to do what he knew was just, which admittedly gave him a beautiful arc. But early on, I felt he was a coward, and I didn’t like him. By the time he finally grew a spine, it was too late for me. Along that same theme, I did not find it at all plausible that Drew could be so brutalized and dehumanized by his captors while Ian stood by, and still find it in his heart to forgive Ian, which, of course, was the point the entire story hung on.

Historical buffs will no doubt relish this story. Fans of gay romance who can easily suspend belief regardless of how implausible the story is will also enjoy this read.

Posted by AlanChinWriter at 10:00 AM