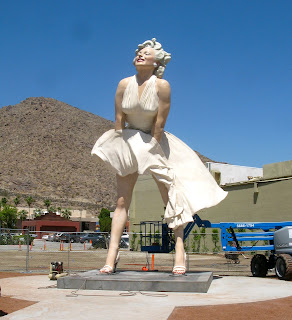 A few months ago, Palm Springs erected a 60-foot statue of Marilyn Monroe right down town, and people have been talking about it every since.

Last night would have been Marilyn’s sixty-eighth birthday, and Palm Springs threw her a party. At a small park adjacent to the statue, they set up a stage, and as the sun set behind the mountains to the west, the celebration began with an Elton John impersonator who was in great voice. Two other local jazz bands performed sets, and the highlight of the evening came when a Marilyn Monroe impersonator joined the Elton John impersonator to sing Candle In The Wind, with several hundred people in the audience holding up glow sticks.

It was a beautifully hot evening (mid-90s), with hordes of interesting looking people milling around, and hours of fun music. It turned into one of those nights where I sat back on my blanket, taking it all in, holding hands with my husband, and simply feeling grateful to be alive.

And by the way, Marilyn looked fabulous for sixty-eight.  Love her.

Posted by AlanChinWriter at 8:12 AM