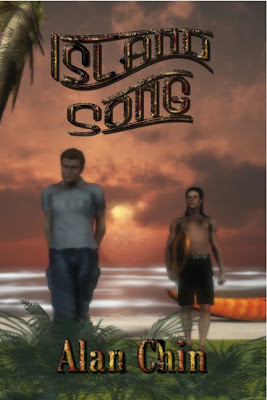 Wanted to share the cover art for my debut novel, Island Song. The artist is Beckie Clymo, and I'm not sure what other covers she has designed. I had quite a heated fight with my publisher, Zumaya Publications, over this cover. I had submitted three different ideas for covers, all of which were attractive and upbeat, but I was over ruled on each idea. This cover, although it is not nearly as eye catching as I had hoped for, is certainly an improvement on the first two sketches they presented to me. I would love you know what people think of this cover, good points or bad, so please leave a comment to let me know what you think.
Here's a snippet of what the story is about:
After the death of his lover, Garrett Davidson finds himself sitting in a Hawaiian beach shack, staring at the vast unfathomable pacific. He has nothing left. Despair has robbed him of his elegant home, lucrative job, friends, and his sanity. The single thread holding him to reality is the story he has come there to write, Marc's story; the story of his lost love. Then Songoree walks into his life.
When Songoree, a local surfer, attempts to heal Garrett's wounded spirit, they become entwined in an extraordinary relationship. But the stakes are raised when Songoree's grandfather, a venerable Kahuna, uses his ancient shaman methods to harm Garrett in order to fulfill his own aspirations. A clash of wills erupts between grandfather and grandson with Garrett caught in the middle, driving the plot to an unexpected ending that will brutally test the human spirit . . . but not break it!

Posted by AlanChinWriter at 1:12 PM

I'm not usually a fan of Poser-Sims people on covers but this isn't as bad as many because of the blurred effect. That being said, it makes my eyes feel funny because I think there's something wrong with my focus - perhaps that's caused by the crisp fonts against the blurryness.

But generally, I'd give it a thumbs up and it's not a cover I'd have to use a spare dust jacket for, which is the main thing!

When I first looked at it, I thought the title was "Slang Song" and then "Sland Song" and only after about 5 looks did I realize it was Island Song.

I think the people look like Sims and I never thought the Sims were attractive or sexy. They also wouldn't entice me to buy the book.

Alan, I'm afraid I agree with the other posters-- the people just don't look real, they look computer generated. I like the general concept and layout, though.

I love the sky, but have to agree with everyone else.
Maybe just use that really brilliant sky without the blurry figures and squinched title.

"Is he surfing with a belt on?" That was my very first thought when I saw the cover, followed immediately by, "Those shorts should ride a lot lower."

:-) We've only just moved from Hawaii and I miss the beach. I do like the look (especially the sky), layout, general feel of the cover, but agree with the others about the people.

I'm intrigued by the name "Songoree." What's the story behind his name?