Island Song, is a story of mystical romance in the South Seas. Chin’s novel astutely tackles a plethora of GLBT issues, including losing a lover to AIDS, coming out, cultural dissimilarity, alternative family structures, discrimination and gay-bashing.

Alan Chin’s moving story follows mainlander Garrett Davidson who, two years after the death of his lover, sits in a Hawaiian beach shack staring out over the vast empty Pacific. He has nothing left. Despair has robbed him of his elegant home, his lucrative job and his sanity. The single thread holding him to reality is the story he has come here to write – Marc’s story, the story of his lost love.

Then Songoree breezes into his life, and as he attempts to heal Garrett’s spirit they become entwined in an extraordinary and dangerous relationship. But Songoree’s kahuna grandfather has plans for Garrett, and when a clash of wills erupts between grandfather, grandson, and hostile islanders bent on destroying the connection between Garrett and Songoree, Garrett is caught in the middle, fighting for his life and plunging headlong into a situation that will brutally test the boundaries of the human spirit.

Alan Chin joins the small but exceptional, award-nominated authors of Zumaya Boundless, which include Dorien Grey, with his Lambda Award-nominated mystery series featuring PI Dick Hardesty, Susan M. Brooks with her highly praised DIY-winning She’s the Girl, British Fantasy Award-nominee James Bennett with his suspense novel Unrequited, and humorist Kage Alan with his two novels A Funny Thing Happened On The Way To My Sexual Orientation and Andy Stevenson vs The Lord Of The Loins.

Island Song and all Zumaya Boundless titles are available on Amazon.com, Barnes and Noble Online, other online booksellers, and select independent bookstores. Also, ebook formats are available at Amazon, Fictionwise, eReader and several other vendors.
Born in Ogden, Utah, in 1953, Alan Chin was raised in the San Francisco Bay Area. He earned a Masters in Writing from the University of San Francisco and currently lives in San Rafael, California. Island Song is his first novel. His second, a historical novel titled The Changi Lover, is scheduled for publication in 2009 by Zumaya Boundless.

Posted by AlanChinWriter at 3:09 PM 0 comments

Allow me to share an incident that happened to me last weekend. My husband and I were at a dinner party in San Francisco with six other gay friends. After too many bottles of wine, the topic of conversation dipped into politics and it seemed everyone had something to say about McCain’s running mate, Sarah Palin.

I was taken aback when one of the older men at the table stated that he was so impressed with Palin, that he planned to vote for the McCain/Palin ticket. People argued that Palin, while certainly feisty, had little to no political experience, and that voting for McCain equated to voting Bush in for a third term. But this man brushed all arguments aside and stated that if Bush could run again, he would gladly vote for him a third time.

I was floored. I had heard about gay republicans, but this was my very first encounter with one. I asked him how he could justify voting Republican when that party is hell-bent on eroding all the gay rights we’ve struggled for over the last few decades. He stated simply that the Republicans support gay rights.

For anybody reading this who feels the same way, keep reading.

The Republican Convention's stand on "Don't Ask, Don't Tell” contains this plank: "To protect our servicemen and women and ensure that America's Armed Forces remain the best in the world, we affirm the timeliness of those values, the benefits of traditional military culture, and the incompatibility of homosexuality with military service."

While the Democratic Convention Platform states: “Allow All Americans to Serve. We will also put national security above divisive politics. More than 12,500 service men and women have been discharged on the basis of sexual orientation since the "Don't Ask, Don't Tell" policy was implemented, at a cost of over $360 million. Many of those forced out had special skills in high demand, such as translators, engineers, and pilots. At a time when the military is having a tough time recruiting and retaining troops, it is wrong to deny our country the service of brave, qualified people. We support the repeal of "Don't Ask Don't Tell" and the implementation of policies to allow qualified men and women to serve openly regardless of sexual orientation.

Yes, both parties want to repeal “Don’t Ask, Don’t Tell”, but the Republican Party has once again made discrimination against lesbian, gay, and bisexual service members an official element of its vision for the United States. At the same time, the Democratic Party is committed to ending all forms of discrimination. So how should you vote? Help us end discrimination, once and for all.

Join me in sending a clear message to the Republican leadership that their position regarding lesbian, gay, and bisexual service members is unacceptable. Sign our petition right away: http://action.sldn.org/incompatible

Posted by AlanChinWriter at 8:59 AM 0 comments

Andy Stevenson – a nerdy, nineteen-year-old, college student from Detroit, Michigan – is so deep in the closet that he is seemingly the only one who doesn’t know he is gay. He uses a sarcastic wit to keep family and schoolmates at a safe distance, which works so perfectly well that he is still a virgin with no hope of overcoming his embarrassing deficiency.
But his luck is seemingly about to change when he is asked to accompany his alcoholic Grandmother on a six day trip to California to celebrate her brother’s 50th wedding anniversary. Andy envisions thousands of bikini-clad, sun-bronzed women desperate to make love to him, and can’t wait to hit the famous beaches. In his mind, all he has to do to lose his cherry is to first lose his Grandmother…
Once in L.A., the reality of SoCal babes turns disastrous for Andy until Jordan, Andy’s sexy gay cousin, strikes up a flirty conversation and ends up kissing Andy on the lips at the anniversary party. That explosive kiss starts a chain reaction of comical faux pas that eventually force Andy to reevaluate everything he thinks he knows about himself.
Kage Alan paints a hilarious yet touching picture of a teenager coming to terms with his sexuality. This story is a breezy romp, an entertaining and intelligent look at a young man’s struggle with coming to terms with his sexuality. I seldom laughed out loud, but I found something interesting, witty and humorous on nearly every page. It made me chuckle, it made me roll my eyes, it made me remember that time (oh so many decades ago) when I experienced similar feelings of confusion.

The one minuscule criticism I experienced was that the story is a tad predictable, but that didn’t stop me from being totally engaged until the very last page. Often, I would sit down intending to reading 10 or 20 pages, and end up reading 60 or 80. It’s fast, it’s funny, and it’s the perfect book to keep you smiling during a long weekend at the beach. I truly didn’t want it to end. Lucky for me, I already have the sequel on the top of my to-be-read list.

But by all means, pick up a copy and judge for yourself. You won’t be sorry you did.

Posted by AlanChinWriter at 10:57 AM 0 comments 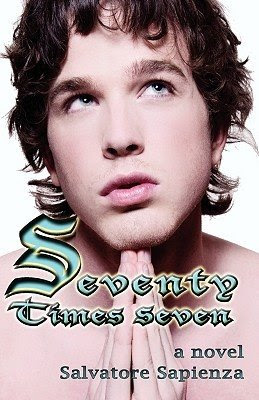 Three Out Of Five Stars

Vito Fortunato, a twenty-seven year old, gay Brother in a Catholic order finds himself torn between his spiritual longings and his carnal desires. Set in the early 1990s, Brother Fortunato is only months away from taking his final vows. Although he and his gay friends frequent gay bars, and he occasionally wakes up with a hangover and wearing only a cock ring, Vito struggles to maintain his celibacy, his spiritual purity, and his ability to forgive others, forgive the Church, and forgive himself. But when Vito is assigned to spend the summer volunteering at a San Francisco AIDS center, he falls in love with Gabriel, a divorced landscaper. When those feelings of love are returned, Vito must choose between his sexual identity and his spiritual idealism.

Sapienza, himself a former Catholic Brother, obviously has an in-depth knowledge of the subject matter -- both the teachings of the Catholic Church and the struggle to integrate Christian beliefs with gay sexual desires -- and it is because of his knowledge that the story comes off seeming so real. This is not a story about a closeted priest who struggles to accept his sexuality; it is a love story, and more importantly, a story about finding dignity, and embracing ourselves. Although I had several issues with this book, the love story that develops between Vito and Gabriel is touching, and a pleasure to read. It made me overlook the many other things that were not so well done.

The story was slow to draw me in, and I didn’t much care for the main characters early on, but that eventually changed as the characters exposed more of themselves. I found the two or three main characters had a wealth of depth, but most of the secondary characters were paper-thin. The main character, Vito, also came off as too preachy in several areas, but that was in keeping with his character and can be easily overlooked.

The read is occasionally jarring because of the abysmal copy editing: jumping back and forth from present tense to past tense for no apparent reason, dozens of typographical and grammatical errors, and a blaring font change. I’ve never before read a published book that was so poorly copyedited.

Those negatives said, I still found this an enjoyable and touching story. I give it three out of five stars.

Posted by AlanChinWriter at 4:37 PM 0 comments