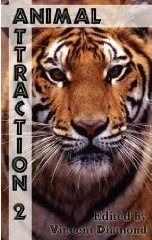 This is an anthology for romance lovers, animal lovers, and for the beast buried deep in all of us. Each story is chocked full of hunky men and the animals that bring them together. Hot-blooded or cold-blooded, the silky pelt of a big cat or the sinuous slink of a boa constrictor, these animals plays a major role of each story in all sorts of interesting ways. The prose styles are as varied as the animals, ranging from richly detailed to sparely snappy. These stories aroused me, and some even inspired me.

I seldom read anthologies, mostly because I’ve found that I typically only enjoy two or three of the usual six to twelve stories, but I have to slog through the mud to find the gems. So I agreed to review Animal Attraction II with trepidation. I read the first story – Elusive Blue by Kiernan Kelly – and thought, this is fairly well written, good paced and enjoyable. Story #2 was a bit of a stinker, The Case of the Missing Boa by Aaron Michaels. At that point I thought: oh well, it’s down hill from here. But I had a very pleasantly surprise. I loved #3, Jane Davitt’s Driven By Destiny, about two men trapped in a house with a panther. Then, each story after that read better, and better and better. Slow and Steady by CB Potts took me on a fascinating ride into the Amazon rainforest in search of huge, albino snails that glowed. The Rodeo Mafia by Julia Talbot expertly pitted a vegetarian, animal activist against a redneck rancher with comical and interesting results. And Vincent Diamond saved the best for last with Hiding in the Snow by Sean Michael, which follows the trek of a nature journalist and a photographer in the mountains of Uzbekistan tracking the elusive snow leopard, only to find themselves in a survival situation. This one in particular kept me on the edge of my seat.

Vincent Diamond has designated that a portion of his editor’s proceeds will be donated to the Florida Draft Horse Rescue ( http://www.drafthorserescue.org/ ) and Gentle Giants Draft Horse Rescue ( http://www.gentlegiantsdrafthourserescue.com/ ) Both charities rescue, rehabilitate, retire, and adopt out Belgians, Clydesdales, Persherons, Shires, and other heavy draft horses. So not only do these wonderful stories excite and entertain, the also help animals. Check it out at:
http://tinyurl.com/mvur7l
.

Posted by AlanChinWriter at 5:10 PM