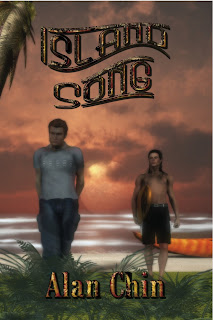 I wanted to share with everyone a review of my novel, Island Song, that Bob Lind wrote for Echo Magazine:

As Garrett Davidson arrives on the remote Hawaiian island, he is a man in desperate need of the restorative power that a simple life of seclusion and thought can provide. Far from the fast-track corporate life he lost in San Francisco, along with the love of his life to the devastating effects of AIDS, Garrett intends to honor Marc's memory by keeping his promise to document their lives together in a book. The house offered for rent on the bay seems perfect for that purpose, but it comes with an additional feature: Songoree, a local 20 year old who will cook his meals and clean for him during his stay. Garrett sees Song arrive each day, walking with a pretty young Hawaiian girl who then turns back home, but can't help but become fascinated by the young man. Despite some initial awkwardness, Garrett and Song become good friends, and the older man is also fascinated by Song's grandfather, who is the island's shaman or religious leader. The older man seems to sense Garrett's loneliness and sorrow, and provides advice that enlightens him to a level he never thought possible.

Posted by AlanChinWriter at 10:30 AM

Have been reading the book now and I like it very much, am slowly getting to the end :(