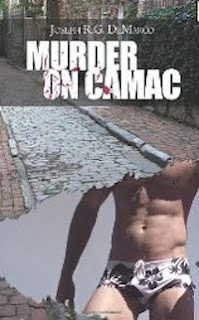 Christian historian and author Helmut Brandt uncovers shocking evidence he believes proves that the decades-old death of Pope John Paul the First was not due to natural causes, but rather, the result of a murder plot that links several high-ranking members of the Church. In this day and age, wielding such damning accusations like that could get a fellow dead, and of course, it does just that. Brandt is gunned down in a gay neighborhood of Philadelphia. When the police choose to push the case to a back burner, calling it a typical mugging gone bad, Brandt’s lover, Timothy Hollister, calls Marco Fontana onto the case.

Marco has his hands full managing a bevy of male strippers called Strip-Guyz, who perform at the local gay watering hole. He doesn’t have time for the case, but a suspicious chain of events pulls Marco into combing through the local Catholic hierarchy as well as crawling through the seedy gay hangouts in the sleazy parts of Philly. Marco brings in a colorful cast of characters to help with his investigation, and goes up against an even more imaginative lineup of suspects. Things seem to be going nowhere until Marco’s life is threatened. Dangerous people and powerful forces are intent on stopping Marco’s investigation. Slowly, clue by clue, Marco uncovers a fascinating knot of intrigue, deceit and murder.

In many ways this is a typical murder mystery. It starts with a murder, and evolves to the point where there is perplexing evidence and suspects lurking in every direction you look. Then the list is narrowed until you think you know who and why, but of course, you don’t.

There are, however, a number of elements that make this story stand well above the typical. The foremost is the entire cast of unusual characters. These people are interesting and fun, with characteristics that challenge the reader. Marco in particular is well drawn and as believable as any protagonist you’ll come across. One of the more interesting things about Marco was revealed by the nature of the case; he was forced to examine his own Catholic upbringing and his feelings about the Church. The author uses this to bring added depth to the character in an interesting and intelligent approach.

Another shining element is the dizzying number of subplots that are constantly evolving throughout the story, most notably, the entire managing-the-strippers subplot. It skillfully adds a playful sexiness to an otherwise dark storyline. Normally when I read a story with this many subplots, it becomes confusing and things tend to drop through the cracks, but not here. The author skillfully develops each subplot and then ties them together for a satisfying ending.

I did note two minor issues with this read. The first, I ran across multiple situations that were a roll-my-eyes coincidence that couldn’t have really happened, but was needed to make the plot work. I normally ignore one or two of these in a story, but it makes an impression after three or four.

My second issue was a bit more serious. Through much of the story, Marco interviewed one character, after another, after another. Many of the clues were revealed through long sessions of dialog, which is not necessarily bad, unless it is over done. I felt the author could have introduced more action scenes to break up the dialog and reduce the monotony of all these long interviews.

These two issues, I assure you, are minor. I feel this is a well-written, interesting, fun story that kept me guessing until the last ten pages. I can highly recommend Murder on Camac to all lovers of the mystery genre.

Posted by AlanChinWriter at 2:55 AM