Book Review: The Quest for Brian by Jeff Graubart 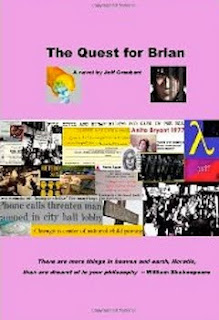 In the early 1970s David Rosen learns that his boyfriend, Brian, lost his job as a teacher because the school board found out Brian was gay. That injustice launches David on a quest for gay liberation, and once on that path he finds the fight a consuming passion from which there seems no escape. But the noble fight for justice does not lift David to a higher plane, rather, he falls farther away from the man he loves and seems to lose every battle, every friend. Because of his extreme and eccentric views, both Brian and the fellow gay liberation fighters distance themselves from David. From Champaign-Urbana to Chicago, to California, and back to Champaign, David descends into a web of obsession, drug addiction and instability.

Much of this story is the author’s memoirs, so the reader becomes witness to actual historical events, heretofore unprinted, starting in the early 1970s and going until the White Night Riots in San Francisco when Dan White got away with murdering Harvey Milk and Mayor George Moscone. This autobiographical historical fiction is an important work, and should raise questions in the soul of every reader, gay or straight, red neck or liberal.

This was not a read I enjoyed, but rather, a read I found interesting. Brian was not a likable character, but he had noble qualities and a sense of justice, which made him a good protagonist. He was a young gay man who somehow linked his unrequited love for Brian Powers with the Gay Liberation Movement, and David’s obsession with both led him down a path of drug addiction and a lust for violent resistance that I found distasteful, as did everybody else in this story. David soon found himself a pariah in the gay community, with nothing to grab onto but the fight.

The story chronicles David’s few successes and many failures throughout this turbulent decade. One of the things I found most interesting was the variety of different gay political groups, and their intrigue, backstabbing and infighting that was a constant theme. Groups would form and dissolve at the drop of a skirt, and seemed more social than political.

The main issue that kept me from enjoying the storyline is that I found the book to be completely over-written. I felt the author could have easily cut out three hundred pages, and the result would be a tighter and more interesting story. As it is, I often found myself wading hip deep in detail that didn’t add much to the story. This was a problem from page one to the end.

This is a long, slow, repetitive, and often entertaining read. I recommend it for those readers who are interested in seeing a unique view of one of the most important and volatile periods in gay history. The following is an excerpt from the book that shows what the political situation was at that time:

Anita Bryant, who was fired from the Florida Citrus Commission, divorced by her husband, ruined in her career as a singer, and driven into bankruptcy; but those who choose to use God to justify their prejudices had better take note.

For more information about his book or author, go to http://thequestforbrian.com/

Posted by AlanChinWriter at 9:40 PM