Book Review: For the Ferryman by Charles Silverstein 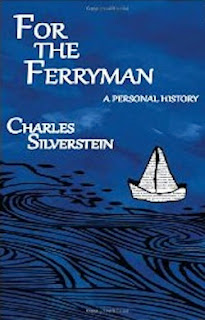 Silverstein is best known for co-authoring the groundbreaking 1977 The Joy of Gay Sex with Edmund White, and co-authoring the sequal 1992 The New Joy of Gay Sex with Felice Picano, which brought the original book up to date with regards to the AIDS crisis. Silverstein also authored a book geared to the parents of gay youth: A Family Matter: A Parents’ Guide to Homosexuality, 1977. So as you can see, the author is no lightweight. He has had a tremendous impact on gay rights, and the personal accounts of his activism are both fascinating and inspiring.

The author’s relationship with William Bory was both touching and riveting. Silverstein speaks candidly of their relationship, their travels to many exotic locations, William’s plunge into drug addiction that included crack cocaine and heroin, and William’s battle with AIDS. The author paints Bory as an eccentric genius that Silverstein loved deeply despite titanic flaws. Their relationship was loving, yet vexing, and the reader is never sure what will happen next.

I’d like to include a passage that shows the author’s personal and humorous style of writing:
When God gave out physical attributes, he did not do it equitably. For all-around attractiveness, the Germans cannot be beat (“God’s little joke,” William mused.) The Scots were given the most perfect asses (not that they knew what to do with them the year William and I were in Scotland.) To the Dominicans he gave large, beautiful penises that hung snugly over their testicles like those drawings of male genitalia in anatomy textbooks that make one wonder whether they are the sexual fantasies of the artists. I did not know about this physical attribute until I arrived at the Hotel Victoria.

So as you can see, this book is not some dry recount of someone’s career, but rather a fun and interesting account of two fascinating people during a time when equal rights for the lgbt community was exploding.

This is a book that is mandatory reading for anyone who has an interest in the Gay Rights Movement, politics during the AIDS crises of the ‘80s and ‘90s, or for anyone who simply wants to read an enthralling love story that happens to be true. For The Ferryman is a bold self-portrait of a distinguished and astounding life.
.

Posted by AlanChinWriter at 11:01 AM