I’ve been writing fiction for over a decade, and have published seven novels. Over the years, I’m met many writers who have complained of how they fall into a funk after finishing a story they really get wrapped up in. I’ve never once experienced this phenomenon called writer’s depression, until now.

Last week I completed the final edits on a manuscript, First Exposure, that I’ve been working on and off on for two years. I’m very proud of this story and the characters who lay their souls bare in the telling. I did get overly wrapped up in these characters, feeling their joy and pain and confusion and hope, but then I do the same with all my novels. And yes, within hours of finishing the manuscript, I began freefalling into depression.

I’ve always been happy to finish a story because I’ve always had new stories to jump right into and take off running again. Beginning new stories is one of my favorite tasks of writing, starting with a blank page and shoving off in a new direction with new characters where anything is possible. I love that. It is such a creative high for me. And even this time, I’ve got two short stories outlined that I’m raring to go on, yet I can’t shake this gloom of not wanting to let go of First Exposure. I haven’t felt this down since losing my dog Smoky four years ago.

Today I’ll begin work on a monk story, in hopes that I can shake these blues, but I’m not holding out much optimism. I can only hope that I can shake this depression quickly, because it’s making me want to stop writing altogether.

First Exposure is a touching story of a straight man, Skylar Thompson, who is a petty officer in the US Navy. He, his wife, son, and grandmother are barely scraping by, and when it becomes clear that Grandma needs fulltime care, something must be done. He takes the night shift at work so that he can work a second job delivering flowers during the day. Problem is, the two men who own the Happy Poppy flower shop are a gay couple, and as Skylar is seen around town with them, word starts traveling through this navy town that Skylar must be gay as well. In trying to provide for his family, Skylar becomes the target of homophobia. 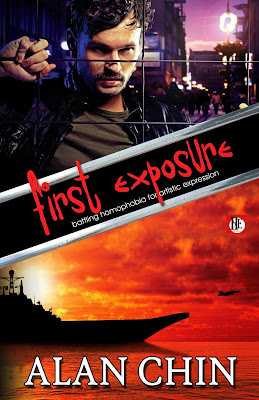 Posted by AlanChinWriter at 10:05 AM