I attended a dinner party last night, and the conversation turned to sin, specifically, which particular sins are the most horrendous.

My answer: Lying. Because lying allows all other sins to exist. It is the cornerstone of all sin, because it allows people to think they can get away with murder, literally.

People are taught to lie in order to avoid punishment. But if they couldn’t lie, then they would learn early on not to do anything they didn’t want the whole world knowing about.

Imagine a world where nobody could lie. Imagine a society where you could trust everyone to tell the truth.
- There would be little or no crime because all the police would have to do is simply ask the criminals if they were guilty.
- We wouldn’t need courts.
- People couldn’t cheat on their spouses without having their partner know about everything.
- Companies would have to declare what kinds of damage they were doing to the environment and to their customers.
- Politicians would have to declare who and what they really represent.
- The 1% would have to pay their share of taxes.

I read an article on the web a week or so ago that claimed we, our society, no longer trust each other. We don’t trust political leaders, religious leaders, companies, news broadcasters, even our next-door neighbors. Lying has gone beyond epidemic to become the norm. We feel we have to close ourselves off to protect ourselves from literally everyone. That, I believe, will be the downfall of our society. 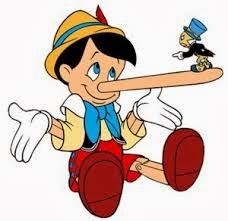 Posted by AlanChinWriter at 8:14 AM