Excerpt: The Plain of Bitter Honey by Alan Chin 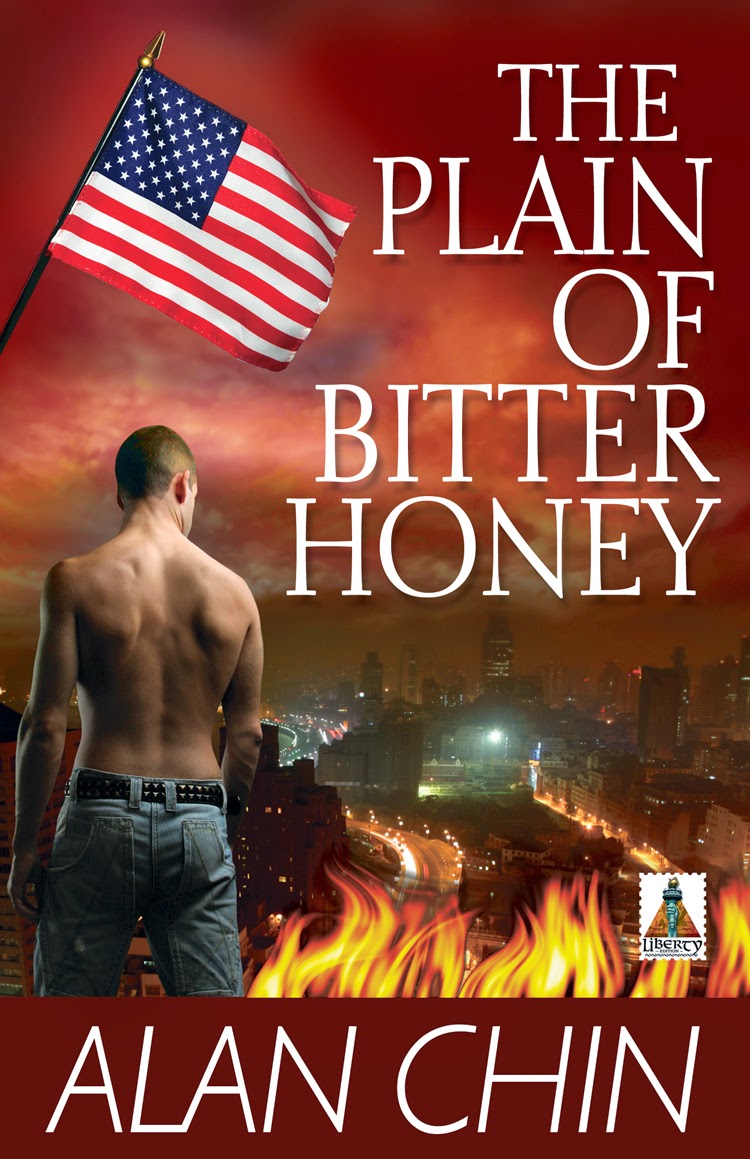 Tuesdays are the days I showcase my own work on this blog. Today I'd like to share an excerpt of my lastest novel, The Plain of Bitter Honey

This story represents a dramatic turn in Alan’s writing. It is a futuristic story of two brothers, one straight and one gay, who battle a corrupt government and each other. This is a tale of survival, of devotion, of love, of finding deliverance and atonement.

This novel is a finalist in the 2014 ForeWord Review Book of the Year Award in the Science Fiction and has received a fistful of Five-Star reviews.  This is what Bob Lind, the reviewer for Echo Magazine, had to say about it:
I've said in the past that Alan Chin is my favorite author, and that is still the case with this new book. It is best described as a sci-fi/speculative/political novel, so unlike any of his previous works I have seen, and he handles the genre with mastery. The story is action-packed, well-constructed and expertly told, with a diverse, developed cast of gay and straight characters working together in situations that risks not only their lives, but perhaps the future of this country. Bravo … five stars out of five.

Blurb:
Twins Aaron and Hayden Swann are fighting a corrupt government taken over by ultra right-wing Fundamentalist Christians in 2055 America. Each brother fights in his own way, Aaron with bullets, Hayden with words. Then one night their world is turned upside down when they are caught in a government sting and they must both flee north into the badlands between San Francisco and Canada, where the only safe haven is a place called The Plain of Bitter Honey, a refuge where heads of the Resistance operate. But the brothers don’t know that government agents are tracking them to the hiding place of the Resistance. Can they find the inner strength to survive?

Excerpt:
The whine of hydraulic motors filled the compartment. The back door crept opened and the front began to rise.

Now came the dicey part. As trash spilled out of the container, they all had to fight their way to the top of the heap so they didn’t end up crushed under tons of garbage, and they had to do it silently—one scream and the armed guards in the cab would be on them. Thankfully, Gideon jumped to Aaron’s aid to help haul Hayden to the top. As the container’s angle grew sharp, the trash picked up speed sliding out the rear.
They rode the debris out, like surfing a wave.

The grade was steep and the brothers tumbled down along with the other freedom fighters. When they came to rest, Aaron still clutched his brother to his chest. Wet, putrid waste piled over them, enough to give them cover until the truck sped away.

Aaron waited until he heard the clang of the truck doors lock shut and the whine of the engine fade. He shook off the trash and pulled Hayden onto his shoulders.

Others scrambled to find the food and equipment scattered among the debris.

Aaron stumbled across a field of waste to lay his brother down in the shade of some cottonwood trees. He dashed back and dug though the rubbish to find his backpack, food and automatic weapon. He worked fast, knowing other trucks would soon show up to dump more refuse, and as soon as the trucks stopped for the day, the Caliban would arrive to scour the heap for anything edible. They had precious little time to gather the equipment and flee the area.

Within twenty minutes, they had assembled a pile of backpacks, blankets, tin cookware, canned food and jugs of water. It only took a few minutes to divvy up the load and pack. Everybody shouldered his or her load while Aaron hauled Hayden onto his back again.

Aaron stared at his pack propped against a tree, realizing that he couldn’t carry both Hayden and the pack, and everyone else was already weighed down. He flashed on its contents—family pictures, mother’s jewelry, childhood keepsakes, a few cherished books Hayden had acquired on the black market, the false passport, and the three hundred thousand dollars. He picked up his rifle, turned and lunged away, leaving the pack.

Gideon took the point, leading them single file toward the foothills below Mt. Tam. As they left the area, they crossed a well-used path. Beside the trampled grass, Aaron noticed a patched-together signpost that read: To Vancouver, 800 scenic miles.

Aaron wondered whether this was the result of well-meant, wishful thinking or whether someone was making a joke. In any case, the sign stood like a beacon, daring all to proceed at their own risk.
They moved fast and stayed under cover as much as possible, but hadn’t gone a mile before Aaron began to lag behind. The average weight of the backpacks was seventy pounds; Hayden weighed one-eighty-five. Aaron struggled with every step.

He realized he could not keep up.

It became a nightmare. His head bowed and body bent under Hayden’s mass, Aaron lurched over rocks and small obstacles. The pain of his pinched toes had become sharp. He was a fool not to have picked better-fitting boots, and he was paying the price for his stupidity. As he stumbled across the open country, the pain crept from feet to his shins, to his knees. Aaron was in serious trouble. He would never make Canada, but he could go on for a while longer. He would stumble on as long as he could, and just hope someone else would take Hayden when he was done in.

Occasionally he heard a grunt or a voice, but everyone trudged along silently for the most part. Having been raised in the city, amidst a constant barrage of noise from traffic and crowds, this silence was unexpected, and frightening.

Once he thought he heard footsteps behind him. He stopped and half-turned, his ears and eyes straining, but he saw nothing. He only heard his own panting and the sound of his heart pounding.

He hurried on, mindful of the uneven path. If he broke a leg now, it meant certain death. He fell further behind until Gideon stopped the others under the cover of trees.

Aaron struggled to catch up. When he collapsed in the midst of the group, they were deep in debate.
“We need to move fast and hard,” Cooper said. “If Aaron can’t keep up hauling his brother, we leave him.”
Weary, Aaron could smell their fear. He checked to make sure Hayden was breathing okay, and crawled to his feet.

“Nobody gets left behind,” Gideon growled. “Now that we’re away from the dump, we need to move carefully and with intelligence, not fast and stupid.”

Cooper shook his head and Maggie spoke for the first time, “Coop’s right. I’m sorry about what happened to Hayden, but right now he’s an anchor. I’m not risking my life to save him.” She glared at Aaron.
If it were anyone but Hayden, he’d be the one insisting they leave him behind.

“All right,” Aaron said between gasps for breath. “I won’t beg you to stay with Hayden and me. Anybody who thinks I’m putting them at risk can leave us behind, and best of luck to you.” On our own, he thought, we don’t have a prayer.

“Listen up,” Gideon said, peering at Aaron. “I’m sticking with Aaron. If you want to live, you’d better damn well stick with us.”

Maggie took two steps toward Gideon. He didn’t flinch as she said, “You have a map of how to get to The Plain of Bitter Honey. Make me a copy.”

How she knew that information, Aaron had no idea, but he was not surprised. She was the smart one, and did her research.

“Too dangerous. If the Caliban gets their hands on that map, Bitter Honey would be wiped out. I won’t take that chance.”

The Armenian raised his sidearm level with Gideon’s head and clicked off the safety.

“Give her the map,” the Armenian hissed, “or I’ll take it off your dead body.”

“One shot and you’ll draw everyone within five miles down on us.”

The Armenian took a step toward Gideon, bringing the muzzle to within an inch of Gideon’s head.
Everybody froze. Gideon reached for his inside coat pocket.

Gideon produced a map and held it out. “If you even suspect you’re being followed, eat it. You cannot let the Caliban get hold if it.”

Maggie snatched it from his fingers.  Aaron stepped closer, until he could see the drawing himself. It was indeed a map of the Pacific Northwest, done in pencil outlining the coastline with little triangles showing the mountain ranges. A compass sat in the top right-hand corner. At the top was a line and above it a word: Canada. But in the middle, within the triangles along the coastline near the California/Oregon border, was a small black dot with the words ‘Plain of BH’ under it.

She folded it back up and stuffed it inside her shirt.

Aaron couldn’t believe she was making such a stupid blunder. Leaving Gideon to go it on her own was madness. It revealed how scared she and the others were. It’s because we let them think they were going south, he thought. We should have let them know the minute we agreed to evacuate everyone who could have been identified. We sprung this run for Canada on them at the last moment, but they needed time to get used to the idea. It was too quick.

“Whoever is coming with me,” she said, “saddle up. I want to be on the other side of Mount Tam by sundown.”

With the Armenian continuing to hold his gun on Gideon, everyone except Liam and the Mexican girl shouldered a pack. Moments later, they trotted away at a fast clip, traveling due north.
“Thanks for sticking with us,” Aaron said, nodding in Liam’s direction as well, “but what the hell can we do without a map?”

“I don’t need it,” Gideon spat. “I’ve been there enough times. I made that stinking map to give to you in case something happens to me. Let’s move out. We’ll skirt around the west side of Tam. We hike single file. Walk in my footprints. No talking; we communicate with hand signals. We take it slow and we zigzag so it’s more difficult for them to trail us.”

“Are the Caliban as fearsome as people claim?” Liam asked. “I mean, I always thought that the rumors were government propaganda to keep us afraid.”

“I don’t know about you,” Gideon answered, “but I don’t plan to find out.”

Everyone nodded. Aaron asked Gideon why he chose to stay with him and Hayden.

“You risked your life to save your brother, and you wouldn’t leave him.”

“So you showed me you can be counted on. Out here that’s everything.”

Aaron didn’t ask why Liam and Juanita stayed. Sticking with Gideon was the smart move.

“What about the others?” Aaron said, looking up the trail they had taken.

Posted by AlanChinWriter at 7:50 AM