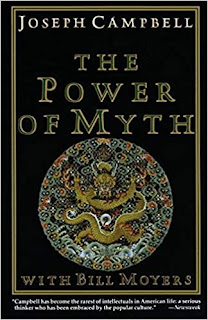 Joseph Campbell is a preeminent scholar, writer, and teacher in the field of mythology, and he has had a profound influence on millions of thinkers the world over. To him, mythology is the “song of the universe, the music of the spheres.” He often refers to it as poetry. With Bill Moyers, one of America’s most prominent journalists, they created a thoughtful and engaging television interview that was transcribed into this book, The Power of Myth. This interview touches on subjects from modern marriage to virgin births, from Jesus to Buddha to John Lennon to Star Wars, offering a brilliant combination of intelligence and wit.

The Editor’s Note to this 1988 book states, “This conversation between Bill Moyers and Joseph Campbell took place in 1985 and 1986 at George Lucas’ Skywalker Ranch and later at the Museum of natural History in New York. Many of us … were struck by the rich abundance of material captured during the twenty-four hours of filming---much of which had to be cut in making the six-hour PBS series. The idea for a book arose from the desire to make this material available not only to viewers of the series but also to those who have long appreciated Campbell through reading his books.”

The Power of Myth is a glittering explanation of the literary world of the spirit, and the poetry (myth stores) that describe how we deal with the spiritual in our day to day existence. I was not only fascinated by this work, I forced myself to ready it slowly, only a dozen or so pages per day, so that I could more fully absorb and meditate on all the knowledge that passed between these two wonderful thinkers.

Posted by AlanChinWriter at 8:50 AM

What an unusual idea to limit the reading to 12 pages a day. I think this would make it easier for me to approach this book with the thought that I might actually get the most out of it. Sometimes one comes across a book and thinks "Wow, this is so comprehensive, so rich; when would I ever be able to properly finish it?" That's how I felt about this book when I first saw it. It's actually something of a reference work for those of us who cannot remember all of the details of such a grand tome.