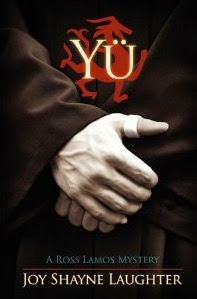 This story is so smart and so polished that I found it nearly impossible to believe that it is Joy Shayne Laughter’s debut novel. It is one of the most delightful books I’ve read in several years. I truly loved every scene, every page, every character.

Each character is richly drawn and complex, as are the relationships between the characters, both in contemporary times and ancient past. Interlaced with the three views of the past, are Lamos’s own tribulations with his career and gay love life. The author delicately weaves the past and present stories together, enticing the reader into this mystery, giving only glimpses of the whole, until it all comes together in a shocking and unpredictable ending. It left me stunned.

Joy Shayne Laughter has, with this one novel, risen to the top of my favorite authors list. Her delectable prose carries the reader along in an enchanting dream. She has demonstrated the power to captivate me with wonderfully unique characters, effortlessly drawing me into their drama, and then crushing my senses with an overwhelming love story.

My only complaint with this novel is that I have to wait until the author’s next release in order to enjoy more of her superb talent. For anyone who relishes romance novels or mysteries, this is a must read. Brava!!!

Posted by AlanChinWriter at 1:41 AM